The greatest joy for a mother is to see her child achieve something in life and the mothers of celebrities are no different! Veteran star Anupam Kher, who recently completed 40 years in Mumbai, shared a priceless video of his mother reacting to his milestone achievement. 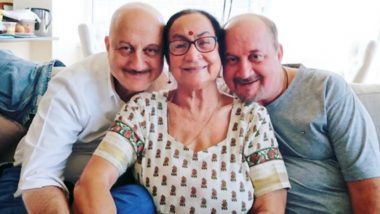 The greatest joy for a mother is to see her child achieve something in life and the mothers of celebrities are no different! Veteran star Anupam Kher, who recently completed 40 years in Mumbai, shared a priceless video of his mother reacting to his milestone achievement. A day after informing his fans that he had completed 40 years in the 'city of dreams', Kher took to his Instagram handle and posted a clip capturing his mother's reaction on the same. Anupam Kher Says He Dreams of Making Saaransh 2 as an Action Thriller.

"I have completed 40 years in Mumbai! Came here on 3 June 1981, today is 3 June 2021," the 'Saaransh' actor is heard telling his mother. His mother then recalled her son was just 18 years old when he left their Shimla house. While recollecting the memories of his struggling days, Kher also shared how he used to get Rs 100 as pocket money from his mother Dulari at that time.

Along with the video, he wrote, "Mom reacts to my #40YearsInMumbai but goes to all other topics. We discuss whether we felt poor or not. She calls our Father chor and then laughs. Then goes into stories of small thefts by my brother too. She is a chalta firta entertainment channel. Touchwood!! God give her long and healthy life. She is hilarious and always forgets that there is a camera recording her conversations."

On Thursday, the 66-year-old actor posted a video of him visiting the first house he lived in with four other people in the city of dreams. "My 40 years in Mumbai. I landed in the 'city of dreams', Mumbai on the 3rd June, 1981 to try my luck in Indian Cinema. This city has been extremely kind to me. From a nobody it allowed me to become somebody. The only thing required out of me was hard work. Thank you 2/15, Kherwadi for giving me a roof! You will always remain my most special and iconic address," he captioned the video.

Kher, who grew up in Shimla, Himachal Pradesh, came to Mumbai to become an actor. The veteran actor made his debut in Mahesh Bhatt's film 'Saaransh'. In the film, he played the role of a 65-year-old man. A few days ago, he even walked down memory lane and shared his love for his first project. Apart from earning fame in Indian cinema, Kher has made India proud at the international level too. He has played vital roles in Oscar-nominated Hollywood movies like 'Silver Linings Playbook' and 'The Big Sick'.

He has also featured in the American drama series, 'New Amsterdam'. Kher, who had recently won the Best Actor award at the New York City International Film Festival for his short film titled 'Happy Birthday', has several other projects in the pipeline including 'The Last Show', 'Mungilal Rocks', and 'The Kashmir Files'.