Less than a year later, IoTronix, a company envisioned to revolutionize the automation industry, launched its first generation of IoT devices that demonstrated exceptional capabilities in terms of efficiency, security and cost effectiveness. 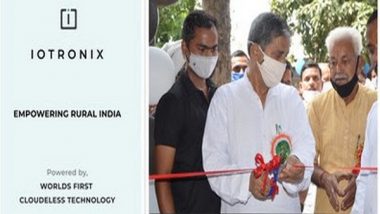 Noida, July 14: About 6 years ago, the Honourable Prime Minister of India, Narendra Modi launched the 'Make In India'.

Less than a year later, IoTronix, a company envisioned to revolutionize the automation industry, launched its first generation of IoT devices that demonstrated exceptional capabilities in terms of efficiency, security and cost effectiveness.

Fast forward 4 years into the present, IoTronix has made incredible progress towards a 'Digital India' by being a pioneer in the field of engineering and technology, making massive breakthroughs with revolutionary technologies and concepts. Taking up newer challenges and facing critical complexities, IoTronix has always found newer ways to overcome impossibilities.

With the future of energy mostly oriented towards being electric, there arises an obligatory responsibility to maximize its usage efficiency. Doing so is next to impossible, with current devices and equipment. IoTronix has however spearheaded the development of robust IoT devices that are efficient, secure and far more reliable than the conventional devices of today.

These IoT-enabled devices, besides being highly energy conservant, can also be controlled with just a click on the smartphone, from anywhere on the globe. IoTronix's services run deeper than just connecting devices. With its innovative business approach set on hardware-as-a-service (HAAS), it has revolutionized the futuristic idea of automated smart homes and smart hotels into a reality.

Addressing the core challenges of the automation industry still remains the driving force of the company. Offering security, privacy and reliability like no other, IoTronix has cemented its place as one of the nation's leading IoT service provider with its proven capabilities.

A step ahead of others in ensuring user security, IoTronix has, in the beginning of 2020, brought forth its 4th generation of IoT devices with the world's first 'Cloudless Technology'; a concept enforcing ultra-privacy by not storing any user data on the cloud, thus making the system foolproof against security threats.

Dedicated to the nation's mantra of economic revitalization through 'Make in India' and 'Aatmanirbhar Bharat', IoTronix has taken its most ambitious and boldest step by establishing the largest IoT manufacturing facility in the country. The facility was inaugurated on 21st June, 2021 in the presence of Shri Mukut Bihari Verma, Honorable Cabinet Minister, Government of Uttar Pradesh.

Set deep into the rural areas at the Indo-Nepal border, this massively sprawling campus of over a hundred thousand square feet is a hub of industry leading technologies. As a symbol of commitment by IoTronix towards rural development, this facility is expected to create thousands of jobs over the next few years, thus supporting the local economy and local infrastructure.

By providing internship to the schools and colleges, IoTronix aims at training students in industry-demanding skills and technologies for the future. IoTronix is also poised on driving the entrepreneurial development in rural areas by encouraging more businesses, creating more jobs and thereby assisting in overall national economic growth and development.

This story is provided by PRNewswire. ANI will not be responsible in any way for the content of this article.