Chris Ayres, Known for Being the Voice Behind ‘Dragon Ball Z’ Villain Frieza, Dies at 56 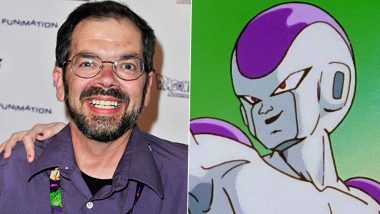 American actor, director and scriptwriter Chris Ayres, known for being the voice behind 'Dragon Ball Z' villain Frieza, has died at the age of 56, after battling COPD and emphysema. According to USA Today, Ayres' girlfriend Krystal LaPorte confirmed the voice actor's death on Twitter with several photos of her and the actor, writing that at the time of his death her "world went dark." Ned Beatty Dies At 83; Hollywood Actor Was Known For His Roles In Superman, Nashville, Toy Story 3 Among Others.

She wrote, "Chris loved you all. How much he loved other people filled the vast majority of our conversations. To those of you who truly loved him back, thank you."LaPorte, who also voiced for several 'Dragon Ball Z' series, added: "I know a lot of people will ask 'is there anything I can do?' Please be more like Chris. Please if you learned anything from him, put it in this world." Christopher Plummer, Oscar-Winning Hollywood Legend, Dies at 91.