At least 10 buses carrying workers from Gujarat's Navsari district are likely to reach Alirajpur by Thursday midnight, he added. 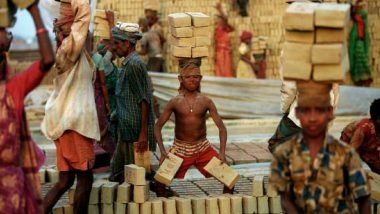 Bhopal, March 26: The coronavirus-enforced lockdown has triggered a mass exodus of migrant workers hailing from Madhya Pradesh from adjoining Gujarat as they headed towards their native villages on foot. The 21-day nationwide lockdown has rendered lakhs of labourers across the country jobless, as several construction works and projects have come to a standstill. Thousands of daily wagers, including women, who had gone to Gujarat's Surat, Ahmedabad, Rajkot and Navsari districts to eke out a living, gradually headed towards their homes in poverty-stricken districts of Jhabua, Alirajpur, Barwani, Ratlam, Bhind and Morena.

Some of these labourers either walked hundreds of kilometres or were dropped at border districts of Madhya Pradesh in vehicles. Speaking to PTI at Jhabua's Pitol area checkpost, an official, who did not wish to be identified, said at least 3,300 migrant workers had returned to the state through the checkpost. Total Lockdown in India: What Remains Open and Shut For Next 21 Days? MHA Issues List of Essential Services Exempted.

Workers, who crossed over, underwent thermal screening for coronavirus at the checkpost, he added. Daily wagers started walking back home on Tuesday midnight when the lockdown came into force, and some good Samaritans provided food and other essentials along the way, one of the workers said.

Vijay Ahirwar (28), a resident of Morena, said there was no point staying behind in Gujarat. "I am a daily wager and now with the shut down in Surat, there was no point in staying there without any money to survive," Ahirwar said. Some migrant labourers entered the state via Chandpur and Chaktala check posts in Alirajpur district.

Around 400 to 500 people, who were mostly on foot, entered the state from checkposts in his district, Alirajpur police superintendent Vipul Shrivastava said. At least 10 buses carrying workers from Gujarat's Navsari district are likely to reach Alirajpur by Thursday midnight, he added.

However, the Gujarat government doesn't want these workers to leave and has been arranging to provide them food and lodging, the SP said. While those who are travelling on foot and are half way across are being let off, others who have still not left Gujarat are being persuaded to stay back, he said.

Jhabua Sub Divisional Magistrate Abhay Kharari could not be contacted despite repeated attempts to know the actual figure of workers crossing over from Jhabua district.