According to TMZ, who first reported the news, members from Poison stepped onstage to let the audience know that Michaels was hospitalized after having a bad reaction to medication. 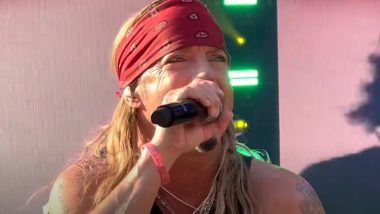 Poison was scheduled to perform Thursday night, June 30, alongside Def Leppard, Motley Crue and Joan Jett on their Nashville stadium tour together, but the band called it quits after frontman Bret Michaels was taken to the hospital. According to TMZ, who first reported the news, members from Poison stepped onstage to let the audience know that Michaels was hospitalized after having "a bad reaction to medication" and would not be able to perform. According to the publication, the reaction may have been related to COVID-19, reported Billboard. The Changeling: Future Islands’ Frontman Samuel T Herring to Debut in Apple TV’s Upcoming Series.

Fans on Twitter seemingly confirmed the hospitalization, including one attendee who said he drove all the way from Kansas City, Missouri, to see the band. The band has yet to comment publicly on the situation, and it's not yet clear if Michaels will be able to perform at this weekend's show in Jacksonville on Saturday, July 2. Stranger Things Season 4 Volume 2 Full Movie in HD Leaked on Torrent Sites & Telegram Channels for Free Download and Watch Online; Millie Bobby Brown, Joe Keery's Netflix Series Is the Latest Victim of Piracy?.

As per Billboard, the huge North American tour was postponed from 2020 due to COVID-19, and then again in 2021. "To all our loyal fans, we wanted to let you know that we learned today that the tour is getting moved to 2022. This is the only way to ensure that we can play ALL of the dates for ALL of you who have purchased tickets. We appreciate you hanging in there and can't wait to get back on stage and bring The Stadium Tour to all of our fans. It is going to be one for the history books!", the band said in a Facebook post in May 2021. The mega tour finally kicked off in Atlanta, Georgia on June 16 and is scheduled to run throughout the summer, concluding in Las Vegas on September 9.