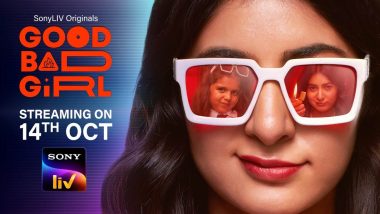 Gul Panag-starrer series Good Bad Girl is set to arrive on SonyLIV on October 14, the streaming platform announced on Wednesday. Set in Mumbai,Good Bad Girl revolves around Maya Ahuja, a lively and quirky girl who has three different stories to tell. "The series reflects on how people, rules, cultures, societies, and laws impact the mind of a seven-year-old to turn her into a crafty and manipulative person by the time she is 28," the show's description reads. Good Bad Girl Trailer: Samridhi Dewan Is Incapable of Telling the Truth in This New SonyLIV Web Series (Watch Video).

Panag, who plays the role of lawyer Zaina Mistry in the series, said she was intrigued by the script and concept of the show. "The story comes with a lot of spunk yet is an everyday story that the audiences will relate to and have a good laugh. The characters are all quirky and freshly written, with various layers to them which add the right spice to the story," the actor said in a statement. "I'm playing a lawyer for the first time, and my character Zaina Mistry is the one who balances out the eccentricities of the other characters in the show. Ramarao on Duty: Ravi Teja’s Telugu Film’s Digital Streaming Rights Bagged by Sony LIV – Reports.

She is the voice of reason, much like how I am in real life as well. The show brings a bunch of talented artists under a roof which has made the journey of filming incredible. I am looking forward to its launch on Sony LIV and the audience's reaction to it," she added. Good Bad Girl is directed by Abhishek Sengupta and produced by Vikas Bahl and Anurag Shrivastava. The show also features actors Samridhi Dewan, Vaibhav Raj Gupta, Sheeba Chadha, Aradhya Anjana, Namrata Sheth, Rajendra Sethi and Zain Khan.