Lily James has revealed that she was unable to recognise herself after her transformation into Pamela Anderson for her role in the series Pam & Tommy. 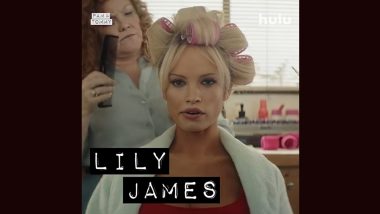 Lily James has revealed that she was unable to recognise herself after her transformation into Pamela Anderson for her role in the series Pam & Tommy. Fox News obtained quotes of James from her recent interview on James Corden's 'Late Late Show', in which she revealed what went on behind the scenes in order to resemble the actress and former Playboy model. She recalled slipping into the iconic red swimsuit Anderson donned for 'Baywatch' for the first time.  Lily James Goes Bold Yet Classy With Her Pam & Tommy Co-Star Sebastian Stan in These New Pics.

"I was very nervous about that day, obviously, because it just feels so iconic. It was wild. Over the four hours, the transformation that took place it was full-on with the makeup and the different prosthetics I had on, it was weird," James said. The 32-year-old star admitted, "I sort of lost myself." "I couldn't see myself anymore. Then I would get be in the bathing suit and then I'd be in my trailer doing my press-ups and getting the blood flowing," she said with a laugh.  Pam & Tommy: Sebastian Stan Watched Pamela Anderson, Tommy Lee’s Sex Tape to Prep Up for His Role.

The miniseries, which became available for streaming on Wednesday, explores the sex tape scandal that rocked Anderson and Tommy Lee's relationship.

But mastering Anderson wasn't just about her appearance. James also discussed repeating the phrases Anderson used that served as "anchors" to get into character. She said her favourite was taken from an appearance on MTV's former 'Cribs', where Anderson yelled, "Security! Security!"

"In America, well, everyone has security, but particularly here there'd be a couple security guards on set and they'd always run over," James said. James co-stars in the miniseries opposite Sebastian Stan as Lee. The sex tape scandal all started in 1994 when the rocker and the Playboy cover girl met at a New Year's Eve party. Lee was freshly single after he and his wife of seven years, actress Heather Locklear, called it quits. Lee and Anderson crossed paths at Hollywood club Sanctuary, where they shared a drink.

The pair later connected while Anderson was preparing to leave town for a photoshoot in Cancun, Mexico. The Motley Crue drummer flew to Cancun and tracked Anderson to the Ritz-Carlton. Within 96 hours, the pair said "I do" on the beach and tattooed each other's names on their ring fingers. Shortly after tying the knot, the newlyweds filmed a sex tape and took explicit photos meant for their eyes only. The X-rated footage would later come back to haunt them. Anderson has walked down the aisle five times. Her most recent marriage to bodyguard Dan Hayhurst ended after one year. As for Lee, he married internet personality Brittany Furlan in 2019.