Actor Sebastian Stan watched Tommy Lee and Pamela Anderson's sex tape "for research" ahead of his role as the drummer in Pam & Tommy. 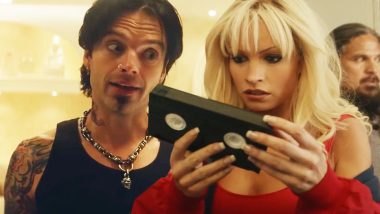 Actor Sebastian Stan watched Tommy Lee and Pamela Anderson's sex tape "for research" ahead of his role as the drummer in Pam & Tommy. Asked if he'd seen the tape, he said: "Well... It was research. I think your job as an actor is to find as much as you can possibly find on whoever you're playing, especially if they're real life people." Pam & Tommy Review: Lily James and Sebastian Stan Series About Pamela Anderson and Tommy Lee’s Sextape Scandal Gets a Positive Nod From Critics.

"But certainly not when it came out, I think I was 12, so I was a little too young for that." Sebastian and his co-star Lily James, who plays the 'Baywatch' actress, spend hours studying real-life footage of the former couple, reports femalefirst.co.uk. Lily said: "Unfortunately (Pamela) wasn't involved but I watched all her interviews, read her books, watched her movies, a lot of 'Baywatch', I watched a lot of 'Baywatch' on the running machines." Lily James’ Cutout Outfit Paired With a Blazer for Pam & Tommy’s Premiere Event Is Sexy AF! (View Pics).

Sebastian added in the interview with UK TV show 'This Morning': "Fortunately there are a lot of photographs of the two of them and every day when I was in the make-up trailer and getting the tattoos, I was playing these playlists of interviews." "The whole story itself, we're learning about it in a new way, there are many facts about this invasion of privacy that we didn't know about."

The pair spent hours being transformed into Pamela and Tommy before filming every day. Lily said: It took three to four hours every day, the team were incredible, it was a lot of make-up and contouring and shading, great costumes." Sebastian added: "Every single one of her looks, the wig and hair, were all specific timed to photographs all the way through, everything they chose to reference was really specific to actual times how they looked."

The 32-year-old actress admitted she needed some help to recreate Pamela's famous cleavage. She laughed: "There was prosthetics involved." Both stars were stunned to be cast in the project and confessed to being "terrified" at first. Lily said: "It was very surprising phone call, I was as shocked as anyone might be at ever playing Pamela Anderson but it was an amazing experience, an amazing challenge." Sebastian added: "I think we had the same experience, we were just terrified, not really understanding very quickly why were cast as the two of them."

(The above story first appeared on LatestLY on Feb 02, 2022 03:21 PM IST. For more news and updates on politics, world, sports, entertainment and lifestyle, log on to our website latestly.com).