To say Rajinikanth is an actor, would be an understatement. In the eyes of his fans, he is an icon, an inspiration, one of his kind -- he's Thalaiva (the leader). Fans root for him, celebrate him, worship him and whatnot. 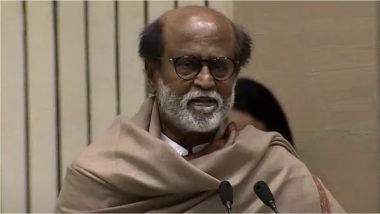 To say Rajinikanth is an actor, would be an understatement. In the eyes of his fans, he is an icon, an inspiration, one of his kind -- he's Thalaiva (the leader). Fans root for him, celebrate him, worship him and whatnot. So on the 71st birthday of the prestigious 51st Dadasaheb Phalke awardee, here's a look at some of the things about Rajinikanth that raise him to the status of the beloved 'Thalaiva' of the masses. Rajinikanth Turns 71: Fans Gather Outside Thalaiva’s Residence in Chennai.

Rajinikanth's acting skillset is a complete package. Known for his panache, exciting stunts and mind-boggling action, Rajinikanth can effortlessly play any kind of role -- whether it's a don, a common man, or a robot. His powerful, action sequences, especially wherein he takes on the bigger evils in society, makes even the audience feel empowered. He's no behind in comedy and can effortlessly ace being the funny, cool guy. His dialogue delivery and punchlines, along with his charismatic personality, are strong enough to leave an everlasting impact on the audience. Mammootty Shares A Pic From Thalapathi To Wish Co-Star Rajinikanth On His 71st Birthday!

From working as a bus conductor to striving hard to making it to the top, Rajinikanth's journey and success story are extremely inspirational.

He began his professional life by doing some odd jobs including that of a carpenter and a coolie. Later, he got a job with the Bangalore Transport Service as a conductor in 1973. While working as a bus conductor, Rajinikanth came across an advertisement in a newspaper about acting classes at Madras Film Institute.

His family was against the idea, but his friend and co-worker Raj Bahadur encouraged him to join acting classes and even financed his time at the Madras Film Institute. Even while choosing characters, Rajinikanth has often taken up roles that showed the struggles of the ordinary man, who rose to the occasion against all odds. That made him both relatable and inspiring.

Coming to his off-screen persona, he is the most humble gentleman. He isn't pretentious about what he looks like, choosing instead to be simple and humble in his public appearances.

By the 1990s, Rajinikanth established himself as a commercial entertainer. Almost all the films released during this period were highly successful at the box office. His track record at the worldwide box office is remarkable. Not many know that it is Rajinikanth who began the 100-crore club in the Indian film industry. His 2007 film 'Sivaji' was a blockbuster and reportedly the first Indian film to enter the 100-crore club. The science-fiction drama 'Enthiran' took six days to enter the 100 crore club in 2010. Rajinikanth's latest Tamil film 'Annaatthe', despite opening to mixed response, has gone on to make 100 crores worldwide in just three days since its release.

While Rajinikanth is one of the highest-paid actors in the country, he is also among the top ones who believe in charity and provide for the people in times of need and distress. In May 2021, Rajinikanth donated Rs 50 lakh towards Tamil Nadu CM's Covid-19 relief fund. In March 2020, the Tamil superstar donated Rs 50 lakhs to the Film Employees Federation of South India (FEFSI) workers, who were impacted by the suspension of film shootings due to the coronavirus outbreak.

In June 2017, the actor pledged Rs 1 crore for inter-linking rivers, to take steps to facilitate the linking of peninsular rivers like Mahanadi, Godavari, Krishna, Palaru, and Cauvery. In December 2015, he stepped forward to help the rain-hit victims of Tamil Nadu. He had donated Rs 10 lakh to the Chief Minister's Public Relief Fund. The list of his philanthropic deeds goes on.

Not restricted to Tamil cinema, Rajinikanth has made his mark in the Indian film industry as a whole. While a majority of his body of work might be in Tamil, he still found a way to transcend boundaries in a way only Thalaiva could.

He has reinvented himself and stayed relevant over the years. He has not let his age affect the charm with which he always held his audience. This and a lot more things are what makes Rajinikanth extraordinary.