Bollywood star Shahid Kapoor is here to add oomph to your Wednesday with his latest stunning pictures. Taking to his Instagram handle, the actor posted a bunch of jaw-dropping pictures. 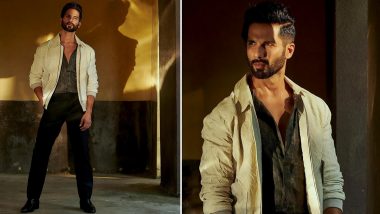 Bollywood star Shahid Kapoor is here to add oomph to your Wednesday with his latest stunning pictures. Taking to his Instagram handle, the actor posted a bunch of jaw-dropping pictures in which he can be seen sporting a crispy lemon jacket paired with a green shirt and dark trousers. Chrissy Teigen Responds to Backlash for Posting About Eyebrow Transplants, Says 'WHY Are People So F--Ing Riled Up Over Any Little Thing I Do?'.

The actor looked incredible with his striking poses. He completed his outfit with a pair of shades. He added the caption, "Wake up n pose." Fans went gaga seeing his pictures and flooded the comments section. "Wake up and kill it just by existing," a fan wrote. Taylor Swift Celebrates Her Grammy Awards Nomination, Sings ‘Champagne Problems’ in a White Gown (Watch Video).

"The best Kapoor," another added. Meanwhile, on the work front, the makers of Shahid's upcoming film 'Jersey' released the film's trailer on Tuesday. The cricket-themed film which also stars Mrunal Thakur is a remake of a Telugu National Award-winning movie of the same name.

Apart from 'Jersey', Shahid is also set to star in filmmakers Raj and DK's upcoming OTT project which will also feature actor Raashi Khanna. He will also be seen in an action avatar in the new film titled 'Bull'. The upcoming film is set in the 1980s inspired by events from the life of Brigadier Bulsara. Debutant Aditya Nimbalkar will helm the project.