As a schoolboy in Johannesburg, Walker had been coached by Allan Watkins and other Glamorgan players, so when in Bristol on shore-leave Peter decided to contact his old coach in Cardiff. 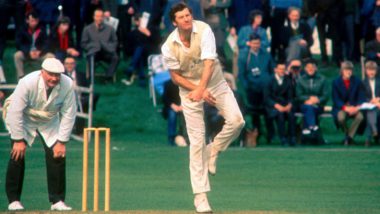 London [UK], April 6: Former England and Glamorgan County Cricket Club all-rounder Peter Walker has died at the age of 84 following a stroke. Walker was born in Bristol but grew up in South Africa, before spending a couple of years in the Merchant Navy. As a schoolboy in Johannesburg, Walker had been coached by Allan Watkins and other Glamorgan players, so when in Bristol on shore-leave Peter decided to contact his old coach in Cardiff. Cancel County Season if it Can't Be Played in Full, Says Alastair Cook.

Walker joined the full-time staff in 1956 as an attacking middle-order batsman and a left-arm swing bowler, and in 1959 he passed the 1,500 run mark. The following year he won three Test caps for England, playing in the series against South Africa and in 1961 Walker scored 1,347 first-class runs, took 101 wickets in all games and held 73 catches.

In the history of county cricket, only Wally Hammond and Micky Stewart have bettered this outstanding seasonal return. During the 1960s Peter also adapted his bowling style to left-arm spin, and his all-round skills made him a key and an integral member of the Glamorgan side.

Gareth Williams, Chairman of Glamorgan Cricket, said, "Everyone at Glamorgan is saddened to hear this news. Peter was a club legend, a man who gave everything he could to the club he loved while playing, and later in an off-field capacity. He gave so much back to the game, in particular through his work with Cricket Wales and the National Cricket Centre, and through his outstanding service as President of Glamorgan."