Ahead of the Municipal Corporation of Delhi (MCD) polls, all arrangements have been made in regard to security and surveillance by the Delhi Police, said Special CP (Law & Order) Sagar Preet Hooda. 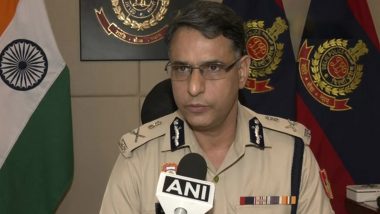 New Delhi, December 2: Ahead of the Municipal Corporation of Delhi (MCD) polls, all arrangements have been made in regard to security and surveillance by the Delhi Police, said Special CP (Law & Order) Sagar Preet Hooda.

"Delhi Police's arrangements are sufficient. There will be a total of 30,000 jawans on duty out of which 16,000 would be Delhi Police jawans and the rest would be outside forces," said Special Commissioner Hooda. Congress Likely To Conclude Bharat Jodo Yatra by Hoisting Indian Flag on Republic Day in Kashmir: Sources.

The top officer said Central Armed Police Forces (CAPF) jawans and home guards will also be deployed. Point-to-point planning has been done, Hooda said, adding, "Security forces will keep a watch with the help of drones. Around four to five drones have been assigned to each district.' Neelachal Express Passenger Dies After Iron Rod From Outside Pierces His Neck Near Aligarh Junction (Watch Video).

The high-stakes civic polls are slated for Sunday and the votes will be counted on December 7. The elections to the 250-ward Municipal Corporation of Delhi are seeing high-pitched contests between the BJP, which currently holds the reins of the civic bodies in the national capital, and the AAP, besides the Congress. The national capital's Excise Department has announced that alcohol sales will be prohibited for three days in Delhi starting from Friday evening. The three-day ban will come into force from the time the campaigning ends until the completion of voting.