India News | After Announcing on Social Media That He is Quitting Politics, Babul Supriyo Says He Should Be Allowed Dignity of Silence

After announcing on social media that he is quitting politics, Bharatiya Janata Party (BJP) leader Babul Supriyo told ANI that he has written what he needed to write and should be allowed "dignity of silence" on the matter. 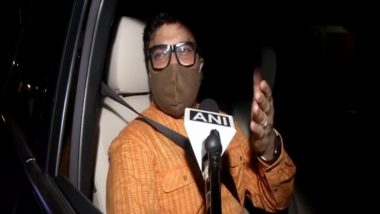 New Delhi [India], August 1 (ANI): After announcing on social media that he is quitting politics, Bharatiya Janata Party (BJP) leader Babul Supriyo told ANI that he has written what he needed to write and should be allowed "dignity of silence" on the matter.

"I have written what I needed to write. Please allow me to keep my dignity of silence. I am not going to say or react to anything or anyone. Everyone has their own right to decipher whatever I have written in their own way," he told reporters.

Earlier this month, the BJP leader has resigned as minister of state for Environment, Forest and Climate Change.

"I really do not have comments to make. Please let me keep my dignity. I do not want to say a single word. Whatever I wanted to say, I have written it," Babul Supriyo reiterated the same opinion of remaining silent, when asked why he announced his retirement from politics.

The MP had said earlier he is not going to any political party and TMC, Congress, CPI(M) had not called him.

Babul Supriyo, who represents Asansol in Lok Sabha, briefly referred to his moving out to the union council of ministers earlier this month.

The MP, who is a film artist and singer, said social work can be done without being in politics.

Babul Supriyo thanked Union Home Minister Amit Shah and BJP chief JP Nadda for turning down his request to leave politics by " inspiring and motivating" him.

" I will never forget this love. I do not dare to go to them again with the same request especially when I have decided what I want to do," Supriyo said.

"I pray they will not misunderstand me and forgive me," he added.

Noting that in 2014 he was "alone" but now BJP is the main opposition party in West Bengal, he said new and old faces co-exist in the party today.

"It does not make any difference to the party if one person leaves," said the BJP leader in his post.

Babul Supriyo said before the 2021 West Bengal assembly polls, there was a difference of opinion between him and the state BJP leaders which is quite normal but few things were coming up in public.

"Somewhere I am responsible and somewhere other leaders are very much responsible. However, I do not want to go for an evaluation now. But it is true that the difference of opinion of senior leaders was harming the party. This does not help party works at the ground level. With my due respect to the people of Asansol, I am informing that I am leaving. I will leave my allotted house within one month. Resigning from my MP post too," he said.

Babul Supriyo joined the BJP in 2014 and has been elected twice from Asansol.

He was part of union council of ministers in the previous BJP-led government. He lost in the assembly polls held earlier this year. (ANI)