Dev Deepawali 2020: PM Narendra Modi Says ‘Annapurna Idol Stolen a Century Ago Is Now on Its Way Back to Varanasi’ 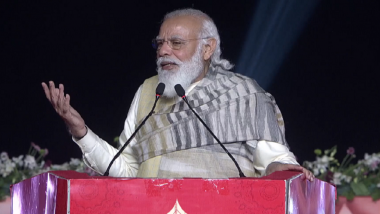 Varanasi, November 30: Prime Minister Narendra Modi on Monday said that the statuette of the Annapurna deity that was stolen over a century ago is on its way back to its original home in Varanasi.

While addressing the public during Dev Deepawali Mahotsav in Varanasi, PM Modi said, "The statuette of the Annapurna deity which was stolen over 100 years ago is now on its way back here. It is a matter of great fortune that Mata Annapurna will come back to her original home." Also Read | AAP Volunteers Serving Farmers Sitting on Protest With Food, Water, Medical Facilities: Arvind Kejriwal.

The Prime Minister was accompanied by state Chief Minister Yogi Adiyanath for the ceremony.Some 15 lakh diyas lit up on the ghats of Ganga to mark the beginning of celebrations on the occasion of Kartik Purnima. Classical dancers performed during the occasion.

Dev Deepawali is a function after Deepawali when a large number of lamps are lit on the banks of rivers and other places on Kartik Purnima. Prime Minister Modi and Uttar Pradesh Chief Minister Yogi Adityanath reached Raj Ghat for Dev Deepawali Mahotsav after offering prayers at Kashi Vishwanath Temple in Varanasi. They also visited the site of Kashi Vishwanath Temple Corridor Project. Ghats of Varanasi were decorated for Modi's visit.