Our government will take care of 100 per cent of people as per the dictum of Prime Minister Modi --- sab ka saath aur sab ka vikas," he said. 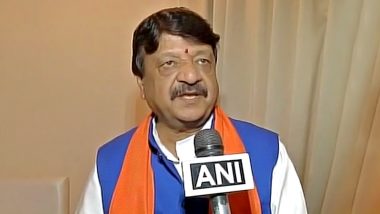 "Most probably from January the process of granting citizenship to refugees under CAA will be started by the BJP government," Kailash Vijayvargiya told reporters. Also Read | Bajrang Dal Leader in Assam Says ‘Hindus Visiting Church on Christmas Will Be Beaten Up’, Video Goes Viral.

"All those people who are being persecuted on religious matters in our neighbouring countries like Bangladesh, Afghanistan, and Nepal, will be given citizenship by the Modi government," he said. The BJP leader said that their party always delivers on its promise and they will provide citizenship to the refugees of the neighbouring countries. Also Read | Mahaparinirvan Diwas 2020: PM Narendra Modi Pays Tributes to BR Ambedkar, Says His Govt Committed to Fulfilling Dreams That Babasaheb Had for India.

"BJP always delivers on its promise. We always do what we promise. BJP had said that we provide will citizenship to the refugees," said Vijayvargiya, adding that all the opposition parties are in the Supreme Court against the CAA, including West Bengal Chief Minister Mamata Banerjee.

The CAA was passed in December last year. The law grants citizenship to Hindu, Sikh, Buddhist, Jain, Parsi, and Christian refugees from Afghanistan, Bangladesh, and Pakistan and came to India before 2015.