The annual report for the year 2020-21 released by MHA reads that due to the lockdown, migrant workers and other persons were stranded in different parts of the country. 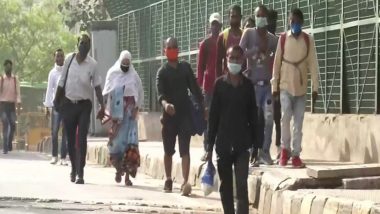 New Delhi, April 27: After an exodus of migrant workers at certain places in India due to the COVID-19 associated first lockdown, the Ministry of Home Affairs (MHA) in coordination with respective states have set up around 41,000 relief camps and shelters across the country where more than 14 lakh people were sheltered. The annual report for the year 2020-21 released by MHA reads that due to the lockdown, migrant workers and other persons were stranded in different parts of the country.

"States and UTs were directed to make adequate arrangements for providing them shelters, food, water, health facilities and also proper counselling. They were also allowed to use State Disaster Response Fund for this purpose and an amount of Rs 11,092 crore was released in advance on April 3, 2020, to all States so as to augment funds with them," the report said. Ministry of Home Affairs is Likely To Announce 100 Days Leave For Every Security Personnel of CAPF.

It further stated, "Around 41,000 relief camps and shelters were set up in the country. More than 14 lakh people were housed there. Besides this, there were 30,000 food camps also. Apart from it, around 17 lakh workers stayed with their employers or in industry campuses where they were being provided shelter and food."

The report also said that from March 25, 2020 till 31 December 2020, MHA control room handled a total of 13,034 calls (excluding calls for a movement of Shramik Special Trains) out of which 854 calls were related to essential goods and services, 11,377 calls were food and shelter, 129 calls were for North Eastern Regions and 742 calls were for other issues.