The Chandigarh Municipal Corporation held a special House on Thursday to discuss the status of the Union Territory--Chandigarh. The House convened after the Punjab and Haryana Assemblies passed resolutions claiming their right on Chandigarh. 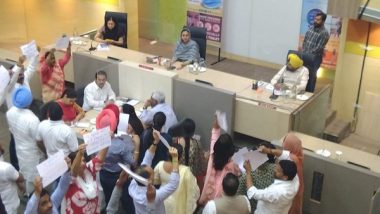 Chandigarh, April 7: The Chandigarh Municipal Corporation held a special House on Thursday to discuss the status of the Union Territory--Chandigarh. The House convened after the Punjab and Haryana Assemblies passed resolutions claiming their right on Chandigarh.

The Government Has Launched/approved Schemes for Utilizing … – Latest Tweet by PIB India. The BJP councillors in Chandigarh had stated that the UT is an independent entity and none has individual rights over it.

Harpreet Kaur Babla, BJP councillor said that the party won't let Chandigarh be a part of either of the states. Notably, 13 councillors representing AAP in the House did not agree, and a ruckus was witnessed in the House today.

The letter signed by BJP councillors stated: "...neither the Government of Punjab tried to know whether the residents of Chandigarh intend to go with the decision of Punjab Government nor they tried to ask from employees of Union Territory whether the rules are in their favour or not and similarly such resolution is going to passed in the Vidhan Sabha of Haryana Government."

Notably, Haryana claims Chandigarh as per JC Shah Commission order. In an attempt to counter the resolution passed by Punjab Vidhan Sabha last week staking a claim on Chandigarh, the Haryana Assembly Tuesday unanimously passed a resolution moved by Chief Minister Manohar Lal Khattar during a special session of the Assembly convened Tuesday.

On April 1, the Punjab Vidhan Sabha unanimously adopted the resolution, moved by the leader of House and Chief Minister Bhagwant Mann urging the Centre to transfer Chandigarh to Punjab.