An orange alert has been issued in Odisha and Andhra Pradesh ahead of cyclone 'Gulab', which is approaching the coastal states from the Bay of Bengal and is expected to make landfall on Sunday evening according to the India Meteorological Department. 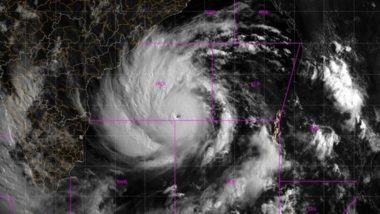 Bhubaneswar, September 26: An orange alert has been issued in Odisha and Andhra Pradesh ahead of cyclone 'Gulab', which is approaching the coastal states from the Bay of Bengal and is expected to make landfall on Sunday evening according to the India Meteorological Department.

The orange alert has been issued for moderate or heavy thunderstorms and wind speed with 30-40 km per hour to reach some districts of Odisha within the next three hours.

According to IMD Bhubaneswar, some districts of Odisha including Puri, Khorda, Nayagarh, Ganjama and Gajapati are likely to be hit by the wind with 30-40 km per hour speed.

"Moderate rainfall or thunderstorms along with one or two heavy spells of rain have also been predicted in these areas," the statement added.

Waterlogging in the low lying areas along with poor visibility and traffic disruption in the urban areas are predicted. The department has advised avoiding movement in the affected areas.

In addition, the Met department has also issued a yellow alert for the Jagatsinghpur, Kendrapara, Bhadrak, Balasore, Rayagada districts of Odisha.

"Light to moderate rain or thunderstorm with lightning is likely to affect some parts of districts of Odisha including Jagatsinghpur, Kendrapara, Bhadrak, Balasore, Rayagada within next three hours," IMD said in a statement.

Further, IMD advised people to keep a watch on the weather and accordingly move to safer places to protect from lightning strikes.

A senior scientist of IMD Bhubaneswar Umashankar Das said that the deep depression over the Bay of Bengal that intensified into cyclone Gulab is likely to move nearly westwards and cross north Andhra Pradesh - south Odisha coasts between Kalingapatnam and Gopalpur around midnight of September 26.

As of now, it has moved nearly westwards of the Bay of Bengal with a speed of 10 km per hour during the last six hours. "The Cyclonic Storm 'Gulab' over northwest and adjoining west-central Bay of Bengal moved nearly westwards with a speed of 10 km per hour during last six hours and lay centred at 530 am on September 26 , over northwest and adjoining the west-central Bay of Bengal near Lat. 18.3°N and Long. 87.3°E, about 270 km east-southeast of Gopalpur (Odisha) and 330 km east of Kalingapatnam (Andhra Pradesh)," he added.

Earlier, the Director of IMD Kolkata informed that the cyclonic storm Gulab is likely to reach the West Bengal coast around September 29.

Andhra Pradesh Chief Minister YS Jagan Mohan Reddy on Saturday held a review meeting on the preparedness in wake of the weather office report on cyclone alert and directed the officials to take all necessary steps for the safety of the people.

Control rooms have been set up in village secretariats and disaster management staff have been put on alert in Srkakulam and Visakhapatnam districts. The district collectors are taking steps to setup relief camps at required locations, the officials said.

Odisha government has also launched an evacuation drive in its seven districts in the south and are focusing on Ganjam and Gajapati.