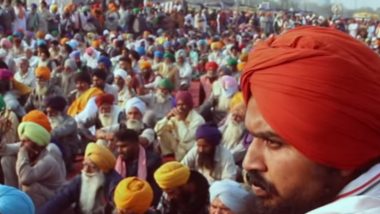 New Delhi, January 13: The Congress on Wednesday accused the government of misleading the country and the Supreme Court by claiming that pre-legislative consultations were held prior to the passage of the three farm laws and claimed this amounted to contempt of court.

Congress spokesperson Abhishek Singhvi at a press conference alleged that the government changed its stand from "having no information" on pre-legislative consultations to suddenly claiming the laws were a result of two decades of deliberations. Lohri 2021: Farmers Protesting at Singhu Border in Delhi Burn Copies of Centre’s New Farm Laws (Watch Video).

He said while the government has now claimed two-decades of consultations, in response to an RTI on the issue on December 22, 2020, it was stated that "this CPIO does not hold any record in this matter".

"This is a serious example of the central government misleading the apex court and misrepresenting the people of India. The passage of legislations is an act of deception and defrauding," he alleged.

"It is thus clear that there are serious attempts at prevarication, distortion, misrepresentation and misleading the nation, the apex court and all relevant stakeholders, apart from indulging in blatantly contumacious conduct. Not even perfunctory, much less any meaningful pre legislative consultation was attempted, much less done by the Modi government," he also alleged.

Singhvi said the government has stated in its affidavit in the Supreme Court that the laws were made after 20 long years of deliberations with the states, whereas there were no consultations and the laws "were rammed through in Parliament".

The Centre said it is filing this affidavit "to remove deliberate wrong perception created by non-farmer elements present at the protest site and using media and social media and to apprise this Court with true facts".

As part of the consultation process, the Centre cited in its affidavit the Guru Committee in 2000, the Model Agricultural Produce Marketing Committee (APMC) Act in 2003, the Empowered Committee of some state ministers in 2013, the Working Group on agricultural production in 2010 and another Model law in 2017.

"However, these evil laws were rammed down the throat of Parliament and all discussion, analysis and interaction was guillotined in the temple of democracy," Singhvi alleged. He said it is thus clear that the government has attempted to "fool" all the people of India all the time by practising "falsehoods on stilts" and it has not even spared the court.

"Can discussions held 20 years ago by some committee qualify as pre legislative consultation for laws passed in 2020," he asked. "Aware of their legislative incompetence in the matter, past governments have sufficed to draft model laws leaving the choice to states. These model laws are way different from the black farm laws rammed down Parliament's throat last September," Singhvi said.