Turning to the second issue, the petitioner said that the High Court of Karnataka totally misdirected itself by assuming that the Petitioners had ever objected to wearing of the school uniform. 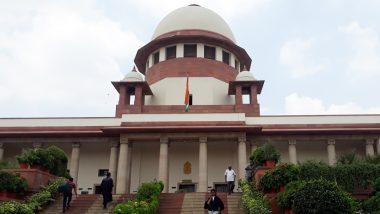 New Delhi, March 28: The All India Muslim Personal Law Board has moved the Supreme Court against Karnataka High Court order which dismissed pleas against the ban on Hijab in educational institutes.

In the petition filed through advocate MR Shamshad, the petitioners All India Muslim Personal Law Board and two Muslim women members, have challenged the Karnataka High Court order dated March 15, 2022 which has upheld government order relating to strict enforcement of dress code in educational institutes.

The petitioner claimed that the Karnataka HC's judgment presents an erroneous understanding of the Islamic texts particularly the primary and highest source of Islamic law i.e, the Holy Quran. "In its impugned Judgment, the High Court of Karnataka curtails religious freedom and constitutional rights of Muslim women," the board claimed.

They further said that certain sporadic groups started heckling Muslim girl students practicing Hijab in December 2021 and when it escalated to a larger scale, the Government of Karnataka issued the impugned Government Order dated February 5, 2022, making an issue of direct discrimination of selectively chosen class of girls by directly referring to "headscarf or a garment covering the head" not being violative of Article 25. Hijab Row: Karnataka High Court’s Verdict on Hijab Unconstitutional, Says Campus Front of India.

"The Government Order dated February 5, 2022, is on the face of it blatantly partisan and communal in colour appeasing to hecklers demand. Ironically, the impugned Government Order dated February 5, 2022, was upheld as being in consonance with "constitutional secularism" ignoring that the same leads to discrimination against Muslims in general and Muslim girls in particular whose right to education are denied," the petitioner said.

Turning to the second issue, the petitioner said that the High Court of Karnataka totally misdirected itself by assuming that the Petitioners had ever objected to wearing of the school uniform.

The petitioner further said that the ground reality is that the women are compelled to remove their Hijab to avail the right of education, at the cost of self-respect and dignity.

"As far as interpretation of scriptures in the holy Quran are concerned there is a consensus amongst religious scholars of all schools of thought namely, Hanafi, Maliki, Shafai and Hambli that practice of Hijab is 'wajib' (mandatory), a set of obligations, which if not followed, he/she will commit "sin" or become a "sinner". Wajib has been kept in the "First Degree" of obedience," read the petition.

Although AIMPLB clarified that they were not a party in the matter heard in Karnataka High Court, but they stressed that it has a suitable locus in the present case to take up this issue.

In February this year, the Karnataka government closed high schools and colleges briefly due to protests and disputes over the wearing of the hijab. The matter is pending before the Supreme Court.