After news of Choksi's arrest in Dominica came on Tuesday night (local time), Browne told media that he has given "clear instructions" to the Dominican authorities to repatriate Choksi to India. 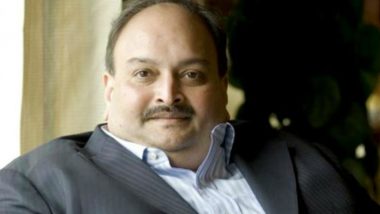 New Delhi, May 27: India is in touch with the governments of Dominica, and Antigua and Barbuda to bring back fugitive businessman Mehul Choksi from the Caribbean region, sources said on Thursday. Choksi, who had recently fled from Antigua and Barbuda, was captured in neighbouring Dominica after an Interpol Yellow Notice was issued against him, Antiguan media reported on Wednesday.

The sources said India was in touch with Antigua and Barbuda on the matter and now contact has been established with the government of Dominica. "We are in touch with them. Our interest in getting fugitives like Choksi and others remains strong," said a source, adding the focus has been to bring them back to the country at the earliest. It is learnt that probe agencies are pursuing the matter of bringing back Choksi to India.

Antigua and Barbuda Prime Minister Gaston Browne said he has asked Dominica to hand the diamantaire over to India directly. After news of Choksi's arrest in Dominica came on Tuesday night (local time), Browne told media that he has given "clear instructions" to the Dominican authorities to repatriate Choksi to India. PNB Bank Fraud Case: Mehul Choksi Detained in Dominica And Will Be Send Back to Antigua, Confirm Officials.

"We asked them not to repatriate him to Antigua. He needs to return to India where he can face the criminal charges levelled against him," Antigua News Room, a media outlet, quoted Browne's interaction with journalists in Antigua and Barbuda.

Choksi is wanted in a Rs 13,500-crore loan fraud in the Punjab National Bank.

He was last seen going for dinner in his car in Antigua and Barbuda on Sunday.

His staff had reported him missing.

Choksi and his nephew Nirav Modi allegedly siphoned off Rs 13,500 crore of public money from the state-run Punjab National Bank (PNB) using fraudulent letters of undertaking. Nirav Modi, lodged in a London jail, is contesting his extradition to India after repeated denial of his bail by courts.