Get latest articles and stories on India at LatestLY. A BJP councillor has moved a resolution seeking the removal of illegal loudspeakers in Jammu, confirmed a local civic body official on Saturday. 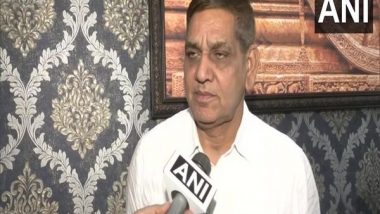 Jammu (Jammu and Kashmir) [India], May 14 (ANI): A BJP councillor has moved a resolution seeking the removal of illegal loudspeakers in Jammu, confirmed a local civic body official on Saturday.

Also Read | UP CM Yogi Adityanath Takes Stock of the Preparations Ahead of PM Narendra Modi's Arrival in Kushinagar.

"We will hold discussions on it and will take a decision according to law," said Chander Mohan Gupta.

The development has come two days after a Kashmiri Pandit named Rahul Bhat was killed by terrorists in broad daylight in Budgam district. On Saturday, Shiv Sena MP Sanjay Raut pointed out that reciting the Hanuman Chalisa or switching off loudspeakers will not solve the problems of the Kashmiri Pandits and that the central government must take tough decisions to end the "atmosphere of instability" in the Union Territory.

The killing of Rahul Bhatt attracted condemnation from the J-K Governor and the BJP leaders who have alleged Pakistan's hand behind the targeted killing.

Speaking to the reporters in Mumbai, Raut said, "Don't raise fingers at Pakistan time and again, what are we doing for the Kashmiri Pandits? Even after the revocation of Article 370, they are not safe and are not able to return to the Valley. Now the common people are not safe, it has no more remained limited to the Pandits," he said.

"The atmosphere of instability that has been created in Kashmir once again will have to be finished by taking harsh decisions. Issues like Hanuman Chalisa and loudspeakers will solve the issue of neither Kashmiri pandits nor Kashmir," the Shiv Sena leader said. (ANI)