It had come to light after 30 kg gold worth Rs 14.82 crore smuggled in a consignment camouflaged as diplomatic baggage was busted by the customs department in Thiruvananthapuram on July 5, 2019. 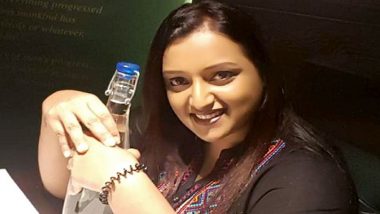 Kochi, March 28: Kerala gold smuggling case prime accused Swapna Suresh has revealed that State Assembly Speaker P Sreeramakrishnan used to call her to his flat for some "personal dirty intentions", according to a document submitted by the Enforcement Directorate (ED) in the Kerala High Court.

She said, "Sreeramakrishnan had called me to the flat in Marutham apartment and told me that it was his hideout. I went there along with Sarith (another accused in the gold smuggling case) to meet him. He told me about the flat's real ownership to convince me to feel safe as he used to call me there with some personal dirty intentions."

"As I didn't agree to his personal interests, the role offered to me in the Middle East College was also dropped. He always kept trying to get close to her as he needed the help of consul-general for his personal affairs in the UAE," she alleged further in her affidavit. Kerala Gold Smuggling Case: NIA File Charge Sheets Against 20 People, Including Sarith PS and Swapna Suresh.

Swapna gave this statement before the ED Deputy Director, Kochi, on December 16, 2020, at Women's Jail in Attakulangara, Thiruvananthapuram.

Swapna further said, "I met him for the first time at one of the functions of the UAE Consulate, Thiruvananthapuram. He took my mobile number and used to send WhatsApp messages and call me up frequently. On several occasions, he invited me to his official residence as well.

"He mentioned that his tenure is only for a short period within which he would like to make some savings and he requested me to tell the consul-general the same. I had conveyed this message of Sreeramakrishnan to the consul-general and they got connected. Sivasankar's (former principal secretary of the Kerala CMO) team in the CMO was aware of all illegal acts done in the UAE Consulate, Thiruvananthapuram," she stated.

She further said, "Sivasankar once told me that whatever done by him was with the knowledge and support of Raveendran (Additional Private Secretary of the Speaker) and the CM himself. They were instrumental in allotting major projects of the state government under different departments to the Uralungal Labor Contract Society without tenders and they were getting huge kickbacks for this act through various Benami names." Swapna is also a prime accused in the Dollar Smuggling Case.

The Kerala gold smuggling case pertains to the smuggling of gold in the state through diplomatic channels. It had come to light after 30 kg gold worth Rs 14.82 crore smuggled in a consignment camouflaged as diplomatic baggage was busted by the customs department in Thiruvananthapuram on July 5, 2019.

It is being probed by the Enforcement Directorate, National Investigative Agency (NIA) and the customs department. During the probe of the Kerala gold smuggling case, the dollar smuggling case came to light. The case pertains to the smuggling of $1.9 lakh by UAE Consulate employee and Egyptian national Khalid Ali Shoukry through the Thiruvananthapuram airport in August 2019.