Karnataka: Muslim Man Who Looked After Orphaned Hindu Girl Marries Her Off to Hindu Boy as Per Vedic Traditions in Vijayapura

Though Masli is a father of two daughters and two sons, he decided to bring Pooja home. 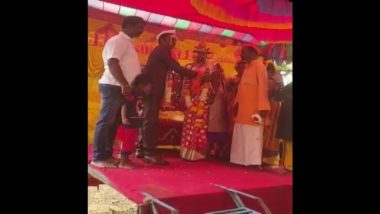 Vijayapura, August 2: A Muslim man who had looked after an orphaned Hindu girl married her off to a Hindu groom in accordance with Vedic traditions in Karnataka's Vijayapura recently. Mehboob Masli is the guardian of an 18-year-old Hindu girl, Pooja Vadigeri, who recently got married. He performed and facilitated Pooja's marriage to a Hindu man as per customs on Friday.

Pooja was orphaned a decade ago and has been taken care of by Masli as a father after her own relatives refused to bring her up. Though Masli is a father of two daughters and two sons, he decided to bring Pooja home.

"It was my responsibility to marry her off to a man from the religion she belongs to," said Masli. "She lived in my home for over a decade but I never forced her to practise our religion (Islam) or to marry a Muslim man. It is against the principles of our religion," he added.

He told ANI that the groom's parents happily accepted Pooja without demanding dowry. The man further urged people to live in harmony amongst diverse communities.

"I also want to give a message to society that everyone should live in harmony," he said. Masli is known in the city for many social services and for conducting events that promote communal harmony. He is also known for organising Ganapati programs in the town. "I am very much blessed to have such great parents with great heart who took care of me," said Pooja, expressing her gratitude.