Get latest articles and stories on India at LatestLY. A single-judge bench of the Delhi High Court on Thursday listed Delhi police's appeal against the bail granted to former councillor Ishrat Jahan before a division bench in the Northeast Delhi riots larger conspiracy case. 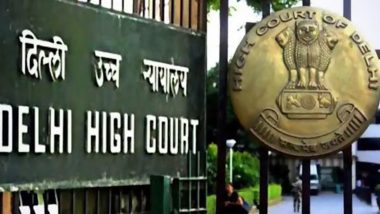 Justice Anu Malhotra listed the appeal before division bench of Justices Sidharth Mridul and Rajanish Bhatnagar after recording the submission of special public prosecutor (SPP) for Delhi Police. The matter has been listed for July 11, 2022. Northeast Delhi Violence: Delhi High Court To Continue Hearing On Batch Of Petitions On February 16.

Delhi police has challenged the relief granted to Jahan on the ground that she was granted bail on the only ground that the accused is a woman ignoring her statement recorded before the magistrate under section 164 Cr. P C.

Karkardooma Court on March 14 had granted bail to Ishrat Jahan who is an accused in the Northeast Delhi riots larger conspiracy case. She was booked under the anti-terror law Unlawful Activities (Prevention) Act (UAPA) by the Delhi Police Special Cell. She was granted bail in 2021 in another FIR registered in 2020.

Additional Sessions Judge Amitabh Rawat had observed in the order, "The entire conspiracy as spelt out in the charge sheet, as far as it ascribes the role of accused Ishrat Jahan, who is a woman, for the limited purpose of bail application on a prima facie consideration, persuades this court to allow the present application for bail despite the embargoes contained in Cr.P.C. and UAPA."

The Counsel for the accused had argued that Section 43D UAPA only puts restrictions but is not an absolute bar to the grant to bail. There is no cogent material in the entire charge sheet to prime facie disclose for commission of a terrorist act or conspiracy or an act preparatory to the commission of a terrorist act. There has been no recovery of any ammunition or firearm from accused or any reading material propagating violence.

It was also argued that the accused is not a member of any banned group or organisation or any Whatsapp group. She is not involved in any terrorist act or armed rebellion. There is no video footage or electronic data or recoveries to show the alleged offence against the applicant.

It was argued in rebuttal that the prosecution had laid great emphasis on 1097 calls and messages exchanged between Ishrat and Amanullah. However on perusal of the charge sheet only 132 calls (outgoing and incoming) have been brought on record. Out of these 29 calls are zero second calls. Moreover, the prosecution has failed to show any incriminating messages, etc. exchanged between Ishrat and Amanullah in order to establish a conspiracy regarding riots among them.

On the other hand Special Public Prosecutor (SPP) Amit Prasad had argued that in the present case, there are two embargoes on the court while considering the application for bail under Section 437 Cr.P.C.

The first limitation is Section 437 Cr. P.C. which circumscribes the jurisdiction of this court in relation to offences carrying punishment upto life imprisonment. The second limitation is the restriction contained in the proviso to Section 43D (5) UAPA. The court is required to record a finding on the basis of broad probabilities after analyzing the entire charge sheet and accompanying documents. A mini trial cannot be done by dissection of the evidence.

It was further argued opposing the bail that individual role is not to be considered in a case of conspiracy where there are multiple accused persons who have done their individual bits in formulating and carrying out the conspiracy.

It is not necessary that an individual accused must take part in the commission of each and every of the conspiratorial acts. Conspiracy is mostly proved by circumstantial evidence. The riots that occurred in Northeast Delhi were not spontaneous outbursts of violence rather it was criminal act of causing planned violence under a deep-rooted conspiracy.