Aam Aadmi Party's (AAP) Punjab co-incharge Raghav Chadha alleged that the Congress could neither ensure any future for Punjab nor it has any future in the state. 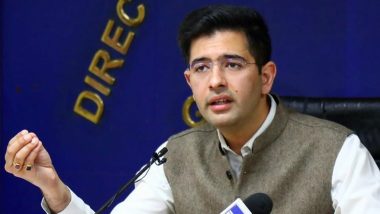 Chandigarh, June 2: Punjab's main opposition party the AAP on Wednesday lambasted the ruling Congress, saying its leaders were "fighting" with each other instead of battling Covid. Aam Aadmi Party's (AAP) Punjab co-incharge Raghav Chadha alleged that the Congress could neither ensure any future for Punjab nor it has any future in the state.

The Congress has formed a three-member committee to resolve the infighting in the party's Punjab unit. Legislators and ministers are meeting the panel led by Rajya Sabha member Mallikarjun Kharge since Monday in Delhi. “Captain-led government in Punjab is not fighting against COVID-19. It (Congress leaders) is fighting with each other,” said Chadha while addressing the media here. Moderna Refuses To Send COVID-19 Vaccines Directly to Punjab Government, Says It Only Deals With Centre.

“I want to say with full responsibility that by fighting with each other, the Congress is now completely finished in Punjab,” alleged Chadha. He said the Congress leaders are sitting in Delhi while “abandoning” Punjab. “Congress in Punjab is on a ventilator and it cannot be saved by any medicine,” he alleged.

Slamming the state government over healthcare facilities, Chadha claimed there was no ICU bed in 17 districts of the state and new ventilators were gathering dust.

“The death rate in Punjab is the highest in the country,” he pointed out. The AAP leader also accused the Congress-led dispensation of trying to fool the people by effecting a “meagre” reduction in electricity tariff.

“Just eight months before the assembly elections, the state government tried to fool people by announcing a reduction of just 25 to 50 paise per unit in power tariff,” he said.

For the last four years, the state government was increasing the power tariff, Chadha said as he asked the Amarinder Singh to adopt the model of the AAP government in Delhi where there is no electricity bill. Power tariff in Punjab was reduced by 50 paise to Re 1 per unit for domestic consumers last month.