Over the decision of the Punjab Cabinet to provide government jobs to sons of sitting legislators of the Congress party, seniors Congress leaders on Sunday backed the decision and lashed out at the critics for failing to appreciate the state policy that has been in force for many years. 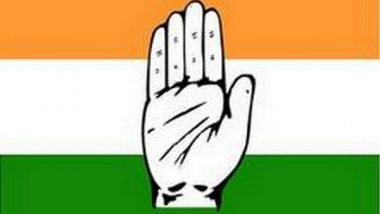 Chandigarh, June 20: Over the decision of the Punjab Cabinet to provide government jobs to sons of sitting legislators of the Congress party, seniors Congress leaders on Sunday backed the decision and lashed out at the critics for failing to appreciate the state policy that has been in force for many years.

Arjun Partap Singh Bajwa, son of Qadian MLA Fateh Jung Singh Bajwa, was appointed as inspector (Group B) in Punjab Police, and Bhisham Pandey, son of Ludhiana MLA Rakesh Pandey, as Naib Tehsildar. The names of Arjun Bajwa and Bhishan Pandey were cleared by the state cabinet on June 18. No Question of Rescinding Punjab Cabinet Decision on Jobs for Sons of Two Congress MLAs. ... - Latest Tweet by ANI.

In a joint statement issued by some of the Ministers of the State Government namely Rana Gurmeet Singh Sodhi, Sadhu Singh Dharamsot, Vijay Inder Singla, Aruna Chaudhary, Sunder Sham Arora, Gurpreet Singh Kangar, Balbir Singh Sidhu, OP Soni, Bharat Bhushan Ashu and the Members of Parliament Gurjeet Singh Aujla, Ravneet Singh Bittu, Jasbir Singh Dimpa and Mohammad Sadiq, the collective decision of the Cabinet to give government jobs to sons of sitting MLAs was termed correct and in line with appointments given to similarly situated persons in the past.

Lal Singh, Chairman, Punjab Mandi Board also came out strongly in support of the decision of Cabinet and advised all political leaders of the Congress to refrain from making any statement that could potentially weaken the party.

The leaders emphasized that the Congress Government has accorded top priority to Ghar Ghar Rozgar Te Karobar Mission, which has already facilitated employment for about 17.60 lakh youth out of which 62,743 persons have been provided government jobs, 9.97 lakh persons have been assisted in self-employment and 7,01,804 private sector jobs have been facilitated.

"The government has already initiated the process for filling up an additional 1 lakh government jobs. This process shall continue unabated and the government shall leave no stone unturned in assisting every unemployed youth in the state," they said.

It was also pointed out that the State of Punjab had always been a welfare state and it has been giving jobs to various classes of persons keeping in view the hardship faced by them as a result of unforeseen and tragic circumstances. Apart from Terrorist Affected Families, jobs and/or financial assistance has been given to handicapped persons, rape victims and the families of 1984 riot victims, Defence Personnel killed in action and Government Employees who die in harness to name a few.

Giving details of appointments given in the past to families of terrorist affected victims, it was pointed out that there are at present at least five such officers in the IAS cadre of Punjab who had originally been appointed to the Punjab Civil Service (Executive) on these grounds. They further quoted the singular case of the Department of Excise and Taxation where 108 jobs, including two ETOs, have been given to the victims on these grounds. Similarly 6 terrorist victims had been appointed as Naib Tehsildar and many other victims have been given significant appointments (DSP, Inspector, etc) in other Departments and continue to serve on very senior positions in the State.

Petrol Pumps, Ration Depots and other self employment avenues have been provided on priority to such families. The victims of the 1984 Sikh riots have also been given similar benefits in addition to financial aid, they said.

Furthermore, in the last four years 72 next of kin of Shaheed Defence and Para Military personnel have been given jobs, including PCS (Executive) Allied services like Tehsildar, ETO, Assistant Registrar Cooperative Societies, etc.

Another 10 persons are being called for interviews shortly while 9 families have reserved the jobs for their minor children. Financial Assistance of Rs 50 Lakhs is also being given as a mark of respect and gratitude to these families.

Even in the recent farmers agitation against the Central Farm Laws, the State Government has assured a job to each of the families of the farmers who have died during the agitation, and the process of providing these is already underway. Financial assistance is also being extended to all such families.

The leaders emphatically stated that when other similarly placed persons were being regularly given benefits under the State Policy it would be unfair to discriminate against the children of MLAs simply because their fathers are currently holding such positions. Even in the past the government has not discriminated on the basis of social standing or economic well-being of families while extending such benefits. The people critical of the move have lost sight of the fact that a job of DSP was given to the grandson of Sardar Beant Singh, former Chief Minister, who was assassinated by terrorists. A job of Naib Tehsildar was similarly given to the wife of Late Baldev Singh, MLA.

Citing additional examples, they said that pursuant to the assassination of A.S. Atwal, DIG, his wife was appointed to the PCS (Executive) and subsequently even his son was given a job of Inspector in the Punjab Police. In the present case, Fatehjung Bajwa was a minor when the tragic incident occurred, in which he lost his father, while Rakesh Pandey was incapacitated by an accident which did not allow him to take up employment under the State. As a result it is perfectly justified that their children should be offered these jobs.

Earlier, Chief Minister Amarinder Singh had also defended the decision of the Cabinet by observing that one cannot allow such sacrifices to go waste while reiterating that the Punjab Government will continue to recognise each such contribution to the state's peace and harmony.