Senior Congress leader Kapil Sibal has slammed former union minister Jitin Prasada over his decision to join the BJP and said it shows "we are moving from 'Aaya Ram Gaya Ram' towards "Prasada politics" in which "you join that party which is giving you 'prasad' (reward)". 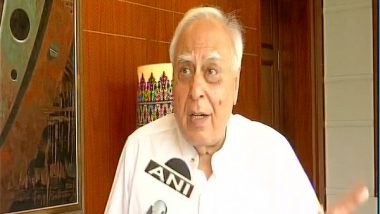 New Delhi, June 10: Senior Congress leader Kapil Sibal has slammed former union minister Jitin Prasada over his decision to join the BJP and said it shows "we are moving from 'Aaya Ram Gaya Ram' towards "Prasada politics" in which "you join that party which is giving you 'prasad' (reward)".

Sibal told ANI that there might be a reason for Prasada to leave Congress which he has not disclosed but is unable to understand why the former minister joined the BJP. Uttar Pradesh: Congress Sinks Into Despair, Leadership Unfazed as Jitin Prasada Joins BJP.

The question is will he get “ prasada “ from BJP or is he just a ‘catch’ for UP elections ?

In such deals if ‘ideology’ doesn’t matter changeover is easy

"Joining BJP is something I cannot understand. It shows we are moving from 'Aaya Ram Gaya Ram' to 'Prasada' politics, in which where you get 'prasad', you join that party," he said. Sibal said he would never join the BJP even if Congress tells him that they do not need his services.

Referring to group of 23 leaders who had written to Congress President Sonia Gandhi last August calling for sweeping reforms "full time and effective leadership" and elections to the CWC, Sibal said, "we are true Congressmen".

Incidentally, Prasada, who joined the BJP on Wednesday after long years in Congress, was also among the 23 signatories to the letter. Sibal said he will never think of joining BJP.

"As far we are concerned, we are true congressmen. I will never in my life even think of joining the BJP, over my dead body. It could be that Congress leadership informs me, look we don't need you anymore. I might think of leaving the party but never in my life join BJP because how do I justify it to myself," Sibal said.

"Why would I join another party? For prasad. We are not doing politics for prasad, we do it based on our ideology. That's the reason our group of 23 raised these issues to reform our party. Listen to us. Our G22 leaders, they want to take forward the ideology of Congress, we all are of the same ideology," he added.

Sibal said it is vital to listen to people in a party and chose the path forward after due analysis. "Whether it's .....corporate life, personal life, if you stop listening the output will not be good. The basic principle of politics is to listen to the people and then decide how to move forward. All should be heard, young, middle-aged and people who are in the party for a long time, because everyone will have their view point. Then with the full analysis, you will move forward on the right path. If you don't listen, you will go in wrong path," he said.