Get latest articles and stories on India at LatestLY. As the outrage over the killing of Kashmiri Pandit government employee Rahul Bhat continues, Bharatiya Janata Party (BJP) staged a protest against the horrifying incident in Srinagar on Saturday morning. 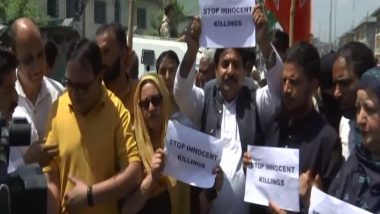 BJP leaders protesting against the killing of Rahul Bhat, in Srinagar on Saturday (Photo/ANI)

Srinagar (Jammu and Kashmir) [India], May 15 (ANI): As the outrage over the killing of Kashmiri Pandit government employee Rahul Bhat continues, Bharatiya Janata Party (BJP) staged a protest against the horrifying incident in Srinagar on Saturday morning.

Protesters were seen raising slogans with placards in their hands which read "Stop innocent killings".

"Every section of the society is condemning this killing. This protest is not only about Rahul Bhat, but all the innocent killings that took place in Jammu and Kashmir. We have been protesting against terrorism for the past 70 years here and we will continue to do so," Manzoor Bhat, BJP media cell in-charge told ANI.

People across the union territory have been protesting against the killing of Rahul Bhat and demanding security in Jammu and Kashmir.

Earlier on Friday, Kashmiri Pandit government employees staged a sit-in demonstration against the killing in Budgam.

Jammu and Kashmir government had also constituted a special investigation team (SIT) to probe the murder of Kashmiri pandit Rahul Bhat who was shot dead by terrorists two days ago.

Lieutenant Governor Manoj Sinha announced that the J-K administration will provide a government job to Rahul Bhat's wife in Jammu and financial assistance to his family.

Rahul Bhatt, an employee of the Tehsil office in the Budgam district's Chadoora, was shot dead by terrorists in Budgam on Thursday. (ANI)