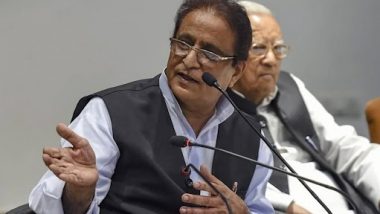 New Delhi, May 19: The Supreme Court on Thursday granted interim bail to Samajwadi Party leader Azam Khan in another case of cheating, relating to Kotwali police station in Uttar Pradesh.

A bench of justices L Nageswara Rao, BR Gavai, AS Bopanna granted interim bail to Khan, and also granted him the liberty to apply for regular bail before the concerned court within a period of two weeks. Samajwadi Party MLA Ravidas Mehrotra Denied Meeting With Azam Khan in Sitapur Jail.

The Supreme Court also assured that the interim bail will be continued until the regular bail is decided by the competent court. Earlier on Tuesday, the apex court had reserved the order on Khan's interim bail plea in the aforesaid case, as opposed by the Additional Solicitor General SV Raju, appearing for Uttar Pradesh state.

Khan is currently been lodged in judicial custody in another matter pertaining to Kotwali in Rampur. The Supreme Court had earlier expressed displeasure with the prolonged delay in the announcement of judgement by Allahabad HC on his (Khan's) bail plea and called it a 'travesty of justice'.

Last week, the Allahabad HC had granted Khan interim bail in the case related to wrongful possession of land. The present application filed by Lzafeer Ahmad stated that Khan was arrested in another FIR which appears to be nothing more than a means to subvert justice and to prevent the petitioner from coming out of his prolonged and politically engineered incarceration.

"The State has, in order to satisfy political vendetta, adopted all means available, to purposefully delay and deny the right to personal liberty to a senior opposition leader and a legislator who is an incumbent and ten term Member of the Legislative Assembly, two-time member of the Parliament, and an erstwhile Cabinet Minister of the State of UP across multiple terms," the application said.

The petition sought to quash the proceedings and grant interim bail to the petitioner during the pendency of this petition. According to the application, the case dated 18 March 2020, registered at Rampur's Kotwali Police Station under Sections 420 and 120B of the Indian Penal Code (IPC) was a false and frivolous FIR wherein some alleged deficiency in the affiliation process of one of the schools being run by a trust is given a criminal colour.

"The said FIR was registered after the petitioner, his wife and son were already taken into custody, for a completely false and frivolous case where the petitioner was not named. The said FIR neither mentioned the date and time of offence nor disclosed the offence, alleged to have been committed (by Azam Khan)," the petition said. Khan has been lodged in Sitapur jail since February 2020 last year as many cases are registered against him.