Anti-Corruption Bureau (ACB) officials caught Kataram mandal Tahsildar red-handed while she was accepting Rs 2 lakh bribe from a complainant at her office chamber on Thursday. 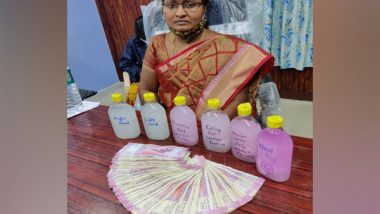 The ACB officials recovered the bribe amount from her bag.

According to the ACB, the Tahsildhar had demanded Rs 2 lakh from a complainant "to process the file pertaining to the issuance of complainant's pattadar passbook and to see that the same is issued".

The ACB officials recovered the bribe amount from her bag.

The accused has been arrested and will be produced in the ACB court, they said. (ANI)