With a new heavily mutant novel coronavirus variant B.1.1.529 reported in South Africa, Hong Kong and Botswana triggering alarms in India, the country's top health experts have urged for stringent surveillance at the government level. 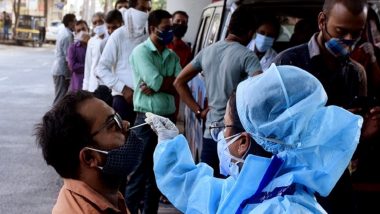 The World Health Organisation which met today to assess the new Covid strain said it would share further guidance for governments on the action they can take Also Read | IBPS Clerk Prelims Admit Cards 2021 Released At ibps.in; Here Are Steps To Download The Hall Ticket.

"Early analysis has revealed that the new variant has a large number of mutations that require and will undergo further study. It'll take a few weeks for us to understand what impact this variant has. Researchers are working to understand more," WHO's Spokesperson Christian Lindmeier said. Also Read | Lalu Prasad Yadav Admitted to AIIMS Emergency Ward Due to Fever and Drowsiness.

Citing serious public health implications that may surface, Union Health Ministry has issued directions to the states regarding international travellers arriving from and transiting through Botswana, South Africa, and Hong Kong.

Levelling up the precaution measures, the ministry has directed the states to undertake rigorous screening and testing. In conversation with ANI, Dr Sanjay Rai, Professor, Community Medicine at All India Institute of Medical Sciences (AIIMS) said, "Botswana variant is a new variant. Sarcov 2 is an RNA virus that has a single strain and during multiplication, this virus enters the body. Currently, only the 'Delta' is a variant of concern (VOC)."

"It's a new variant. We will have to wait and watch, we don't know its overall infectivity but the probability is that it may bypass your existing immunity either acquired through a vaccine or natural infection. If it bypasses, it'll be a serious issue," Dr Rai said on the B.1.1.529 variant.

Dr Rai also said that the new variant may have more than 50 mutations in its spike protein. "But we will have to watch first because it's new and then behave accordingly," he said.

"If the variant is capable of invading natural immunity then it is a really serious issue because, so far, various evidence have shown that natural infection is providing better and longer duration of protection," the expert added.

Adding to it, Dr Atul Gogia, Senior Consultant of Department of Medicine at Ganga Ram Hospital said that the virus is known to mutate and for as long as the virus multiplies in the population, there are chances that it will mutate.

"The variant that has been found in certain parts of the world is the latest variant whose mutant capacity is more than the earlier variants. As a virus mutates, there is an apprehension that it may escape our immune response," he said.

"As we are seeing that a lot of people are being vaccinated and a lot of people have antibodies or immunity, but with the new variant, apprehensions are there as we are unsure whether or not this immunity will be helpful in protecting us against this variant," he added while saying that India has to primarily concentrate on whether the variant will cause severe disease or is more contagious.

Dr Gogia further stated that travelling has become frequent and as the whole world is one global village, getting affected with the new variant is definitely possible. "It is yet to be clear if the new variant is more aggressive or more contiguous. Till we know what it is, following appropriate Covid behaviour is a must," he said.

"Whenever there is a new variant, concern on whether or not the vaccination will work is always there. But as of now, our aim should be to get fully vaccinated and monitor the situation," Dr Gogia added.

The B. 1.1.529 variant carries 32 mutations, many of which suggest it is highly transmissible and vaccine-resistant and has more alterations to its spike protein than any other variant.

As India is strictly depending on surveillance and monitoring, the Union Health Ministry has asked states to send the samples of travellers reporting positive to designated labs of the Indian SARS-CoV-2 Genetics Consortium (INSACOG). In addition, the state surveillance officers have also been asked to coordinate with the INSACOG labs and undertake "test-track-treat."