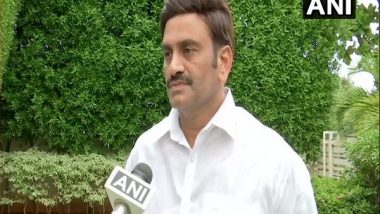 In the letter, Raju wrote, "Our government has successfully completed two years and entered the third year. On that occasion, several full-page advertisements were issued regarding fulfilling of the election promises made. In this regard, one major promise is to increase the old age pension every year by Rs.250 for old age people (AVVA-TATHA) and take it upto Rs 3000 by 4th year which would be a major help for the needy and in view of this we have got overwhelming support from them during the election."

"As old people are equal to gods, I humbly request you to recollect the election promises and render justice to the old age (AVVA TATHA) people by making it Rs 2750 from June 2021 and oblige," Raju said in the letter.

Raghu Ramakrishna Raju has been vocal against his own party for some time. Recently the Andhra Pradesh Crime Investigation Department (AP CID) has filed a case on the MP with sedition charges. The MP has alleged that he was manhandled and beaten during his custody. He had even approached Supreme Court in this regard. He wrote letters to many MPs on the matter.

The MP has complained to the central government of irregularities by the State government regarding R&R package for the Polavaram project, just one day before CM Jagan's visit to Delhi with a major focus on getting clearance of dues for the same project.

In this backdrop, the rebel MP wrote letter to the CM who was in Delhi, after a long time, appealing to fulfil a promise made during the election campaign and gained importance. (ANI)