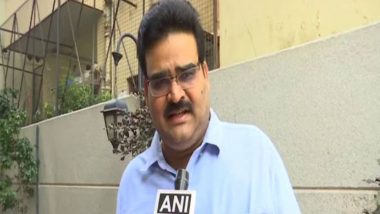 "Who had provoked people, who spoke to come out on the roads against CAA? Wasn't it Sonia Gandhiji from Congress? Who made the 15 crore Muslims remark wasn't it Waris Pathan from AIMIM? Who said separate Assam from India?

Was it not Sharjeel Imam, the chief co-ordinator of Shaheen Bagh protest and several others..."....due to such hate speeches, Police Constable Ratan Lal and IB Officer Ankit Sharma along with over 20 more civilians in Delhi lost their lives.

Who started the protest against the interest of our nation to defame our country's name when American President Donald Trump visited India. Our suspicion on Pakistan agency ISI cannot be ruled out," said Dinakar. He also said that no state government has the right to not implement CAA.

"CAA is a constitutional obligation to every state to implement it. No political party, social and religious outfits should have the right to raise the question over CAA implementation. Some political parties and their supporting organisations are trying to spit venom on Prime Minister Narendra Modi and Home Minister Amit Shah."

Though the same political parties requested and demanded citizenship for the religious persecuted minorities in the neighbouring countries, now they are provoking people against the CAA based on religious lines," Dinakar said. He said it was hard to understand why the Opposition was looking at CAA negatively when existing provisions for granting citizenship are continuing as per the rules."

They are knowingly confusing the people by clubbing together CAA, NRC and NPR. These three are different concepts. NRC is applicable only in Assam as per the Supreme Court's directions and NPR is a general process of population census that held once in the ten years for the implementation of welfare schemes by the government," he said.