He added that a free trade agreement, with 11,000 product lines, will take much longer time, and that would be pursued and finished over next few months, but India and Australia are going for the early harvest pact so that businesses can start enjoying the fruits of this partnership. 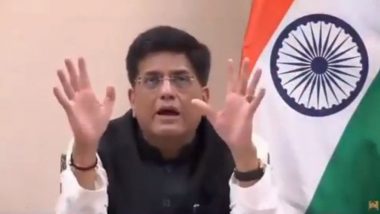 New Delhi, September 29: India and the US should engage in a much bigger way and New Delhi is ready and willing to expand the economic partnership with America, Commerce and Industry Minister Piyush Goyal said on Wednesday. He also called for setting an ambitious bilateral trade target of USD 1 trillion in the next 10 years.

Addressing the 4th Annual Leadership Summit of the US-India Strategic Partnership Forum (USISPF), Goyal said though a lot of effort had gone into negotiating a trade agreement between the two countries during the previous US administration, unfortunately it did not work out.

The minister said India is negotiating an early harvest agreement with Australia, "so now it is left to the US and India to engage in a much bigger way. I would urge all of you to also impress upon your administration (that) India is ready and willing to expand our economic partnership in the spirit of reciprocity and equality." Joe Biden After Meeting PM Narendra Modi: Ties with India Destined to Be 'Stronger, Closer and Tighter'.

While the bilateral trade in goods and services has seen significant growth in the last 10 years, "I do believe that the potential has not even been started," he added.

"I think India and the US should be looking at a balance mutual trade of a trillion dollar in the next 10 years and unless we keep some very ambitious target, we will never get there... "I am happy to engage with the US and look for expanding our economic partnership so then all 4 members of the Quad (comprising Japan, India, Australia and the US) would have very strong economic ties with each other," he noted.

Govt. led by PM @NarendraModi ji is committed to a strategic India-US relationship that is defined by synergy, brotherhood & understanding each other. 🇮🇳 🇺🇸 pic.twitter.com/V9EhDFlZmz

On the trade agreement with Australia, the minister said it is progressing fast and the next round of discussions is on September 30. "We hope to conclude very quickly our early harvest agreement, in which we have identified a few issues, may be 100-200 product lines, some services, some investment areas, which are of pressing interest to both the countries," he said.

He added that a free trade agreement, with 11,000 product lines, will take much longer time, and that would be pursued and finished over next few months, but India and Australia are going for the early harvest pact so that businesses can start enjoying the fruits of this partnership. US Needs Better Ties with India to Keep China, Taliban Under Check: Congressman.

Talking about India's single window clearance system, he said "we will make sure that sitting in Minnesota (in the US), you can identify land you want to buy, pay for it, and ensure all your approvals."