With a belief to unite a workforce inclusive of employees from diverse background, National Aeronautics and Space Administration, (NASA) has already given a number of prolific scientists to the world; and the month of May has been dedicated to celebrating the contributions of those amazing employees by NASA. 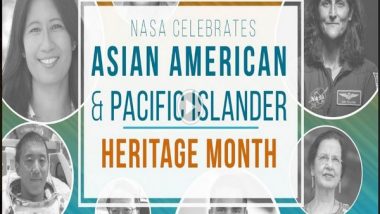 Washington, May 5: With a belief to unite a workforce inclusive of employees from diverse background, National Aeronautics and Space Administration, (NASA) has already given a number of prolific scientists to the world; and the month of May has been dedicated to celebrating the contributions of those amazing employees by NASA.

This May, to celebrate the contributions of its Asian American and Pacific Islander (AAPI) employees - past and present, the American aeronautics organization has organized a variety of internal and external events and products centred on the theme: 'Advancing Leaders Through Purpose-Driven Service'. NASA Captures Maharashtra’s Lonar Lake That Turned Pink Mysteriously, Know Why 50,000 Years Old Crater Lake Changed Its Colour.

He further added that the Biden-Harris administration and NASA are committed to a culture of diversity and inclusion, where all employees are welcomed, respected, connected, and engaged.

"President Biden has set the tone, choosing Vice President Harris as his running mate, appointing the most diverse cabinet in our nation's history, and nominating Margaret Vo Schaus, who, if confirmed, will serve as NASA's next CFO. I am fully committed to ensuring the president's vision is carried out at NASA and beyond," he said.

As part of this month's celebration, the NASA Headquarters AAPI Employee Resource Group has produced a video featuring the many voices of the AAPI community all across the agency and has shared it on their official YouTube handle.

In addition to internal events that celebrate AAPI people and cultures, external events throughout the month will showcase the stories and talents of AAPI members of the NASA workforce.

Dr Kartik Sheth, NASA's James Webb Space Telescope astrophysicist from the Astrophysics Division at NASA Headquarters shared his story and discussed how to become an astrophysicist during a recent episode of NASA STEM Stars.

The panellists will share a story of their life journeys as Asian American and/or Pacific Islander in America. In addition to NASA Television, the event will air on the NASA app and the agency's website.

A number of digital products and social media posts also are available or planned throughout the month to highlight the accomplishments of some of the many people who make up the rich and diverse tapestry that is the AAPI community at NASA, including the video 'With Much Ingenuity, We Soar Together'.

In the video, JPL's MiMi Aung shares her experience and hopes for the younger generation, as well as the Faces of NASA gallery, and a Google Arts & Culture profile of Ellison Onizuka, the first Asian American astronaut. There will also be a special video tribute featuring astronauts Kjell Lindgren, Sunita Williams, Jonny Kim, and Raja Chari that will appear later this month on NASA's YouTube channel.