According to a new Cornell research at the National Academy of Sciences, Cnidocytes, often known as stinging cells, are found in corals and jellyfish. It makes us wary of our feet while wading in the sea, and it's also a fantastic model for better understanding the formation of new cell types. 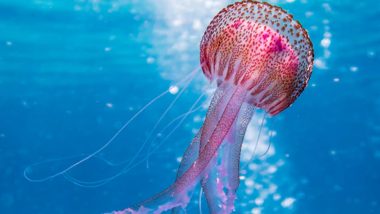 Washington [US], May 22 : According to a new Cornell research at the National Academy of Sciences, Cnidocytes, often known as stinging cells, are found in corals and jellyfish. It makes us wary of our feet while wading in the sea, and it's also a fantastic model for better understanding the formation of new cell types.

In new research published in the Proceedings of the National Academy of Sciences on May 2, Leslie Babonis, assistant professor of ecology and evolutionary biology in the College of Arts and Sciences, showed that these stinging cells evolved by repurposing a neuron inherited from a pre-cnidarian ancestor.

"These surprising results demonstrate how new genes acquire new functions to drive the evolution of biodiversity," Babonis said. "They suggest that co-option of ancestral cell types was an important source for new cell functions during the early evolution of animals."

Understanding how specialized cell types, such as stinging cells, come to be is one of the key challenges in evolutionary biology, Babonis said. World Jellyfish Day: Types of Jellies Found in the Marine World And Their Characteristics (Watch Videos)

For nearly a century, it's been known that cnidocytes developed from a pool of stem cells that also give rise to neurons (brain cells), but up to now, no one knew how those stem cells decide to make either a neuron or a cnidocyte. Understanding this process in living cnidarians can reveal clues about how cnidocytes evolved in the first place, Babonis said.

Cnidocytes ("Cnidos is Greek for "stinging nettle"), common to species in the diverse phylum Cnidaria, can launch a toxic barb or blob or enable cnidarians to stun prey or deter invaders.

Cnidarians are the only animals that have cnidocytes, but lots of animals have neurons, Babonis said. So she and her colleagues at the University of Florida's Whitney Lab for Marine Bioscience studied cnidarians -- specifically sea anemones -- to understand how a neuron could be reprogrammed to make a new cell.

"One of the unique features of cnidocytes is that they all have an explosive organelle (a little pocket inside the cell) that contains the harpoon that shoots out to sting you," Babonis said.

"These harpoons are made of a protein that is also found only in cnidarians, so cnidocytes seem to be one of the clearest examples of how the origin of a new gene (that encodes a unique protein) could drive the evolution of a new cell type."

Using functional genomics in the starlet sea anemone, Nematostella vectensis, the researchers showed that cnidocytes develop by turning off the expression of a neuropeptide, RFamide, in a subset of developing neurons and repurposing those cells as cnidocytes.

Moreover, the researchers showed that a single cnidarian-specific regulatory gene is responsible both for turning off the neural function of those cells and turning on the cnidocyte-specific traits.

Neurons and cnidocytes are similar in form, Babonis said; both are secretory cells capable of ejecting something out of the cell. Neurons secrete neuropeptides -- proteins that rapidly communicate information to other cells. Cnidocytes secrete poison-laced harpoons."There is a single gene that acts like a light switch -- when it's on, you get a cnidocyte, when it's off you get a neuron," Babonis said. "It's a pretty simple logic for controlling cell identity."

This is the first study to show that this logic is in place in a cnidarian, Babonis said, so this feature was likely to regulate how cells became different from each other in the earliest multicellular animals.

Babonis and her lab plan future studies to investigate how widespread this genetic off/on a switch are in creating new cell types in animals. One project, for example, will investigate whether a similar mechanism drives the origin of the novel skeleton-secreting cells in corals. (ANI)