Earlier in the day, Cricket West Indies named Floyd Reifer as the new head coach of the Under-19 team. 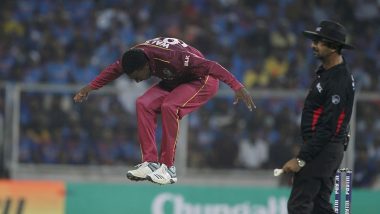 Dhaka, January 15: West Indies leg-spinner Hayden Walsh Jr has been ruled out of the upcoming ODI series against Bangladesh after testing positive for coronavirus. Walsh who is asymptomatic first returned a negative test result on arrival into Bangladesh on the weekend and then had a positive return on his test in Dhaka. This result was verified by a second positive test.

"Following PCR tests administered on Wednesday, January 13, Cricket West Indies (CWI) can confirm that Hayden Walsh Jr has tested positive for COVID-19 and will now undergo a period of self-isolation," the Cricket West Indies said in an official statement.

In accordance with the established medical protocols, Walsh remained isolated from the West Indies squad and is now under the care and supervision of the team physician. India vs Australia 4th Test 2021: Rishabh Pant Urges Ajinkya Rahane to Take Review, Rohit Sharma Laughs Over Wicket-Keeper’s Excitement (Watch Video).

"Walsh will remain in isolation until he returns two negative PCR test results and therefore is unavailable to play in the upcoming three-match ODI series against Bangladesh," the cricket board further said.

The three-match ODI series between the two sides begin from January 20. Earlier in the day, Cricket West Indies named Floyd Reifer as the new head coach of the Under-19 team. The former interim West Indies head coach, and current head coach of the West Indies Emerging Player and High-Performance Programmes will lead the development of the squad as they prepare for the ICC U19 World Cup to be played in the Caribbean in early 2022.