Get latest articles and stories on Sports at LatestLY. Earlier, the Chess Olympiad Torch Relay reached Mumbai on Saturday, where it received a grand reception at Wankhede Stadium 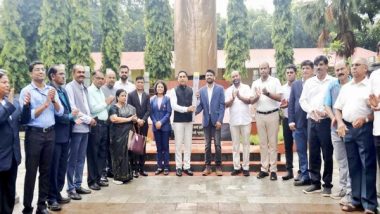 In Goa, State Minister of Sports and Youth Affairs and Art and Culture Govind Gaude received the torch from Grandmaster Anurag Mhamal and handed it over to International Grandmaster Bhakti Kulkarni.

Earlier, the Chess Olympiad Torch Relay reached Mumbai on Saturday, where it received a grand reception at Wankhede Stadium.

At the key event held in Mumbai, Grandmasters Pravin Thipsay, Abhijit Kunte, and Soumya Swaminathan were present along with officials of the Department of Sports, State Chess Association, chess enthusiasts and budding players.

The torch relay was launched by Prime Minister Narendra Modi.

The torch will travel to 75 cities for 40 days before it culminates at Mahabalipuram in Tamil Nadu. Over 200 countries are participating in the Chess Olympiad. Chess grandmasters will receive the torch at various identified venues.

The 44th edition of the world's biggest chess event will be held in Mahabalipuram near Chennai from July 28 to August 10. (ANI)