Is it coming home to London or going to Rome? This is the question that would be answered in Sunday's Euro 2020 final when England and Italy clash at the historic Wembley Stadium to decide the next champion of Europe. 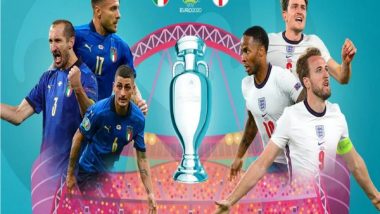 London, July 10: Is it coming home to London or going to Rome? This is the question that would be answered in Sunday's Euro 2020 final when England and Italy clash at the historic Wembley Stadium to decide the next champion of Europe.

After two epic semi-finals, London now hosts a decider which, for the first time in Euro history, will feature England. This blockbuster clash between Europe's old-timers is a dream match-up for all footballing fans around the world as Italy is now the only team between Three Lions and their first major tournament win since the 1966 World Cup. Euro 2020: Adidas Unveils New Ball for Semi-Final and Final of European Championship.

Since that famous World Cup triumph at the previous Wembley Stadium, England has lost in the semi-finals of five major tournaments: EURO '68 and '96, the 1990 and 2018 World Cups, and the 2019 UEFA Nations League. However, Gareth Southgate-led English side has buried those ghosts of the past as they have seen off Germany, Ukraine and, Denmark to earn their chance to end 55 years of drought in the Euro 2020 final.

Southgate's men will have the opportunity to make themselves national heroes when they step out in front of 60,000 supporters at Wembley. And the nerves will no doubt be rising among the squad as they look ahead to the biggest match of their careers.

Facing Three Lions will be the formidable Italians who are arriving in London with a 33-match unbeaten run. Their last defeat came all the way back in September 2018. Roberto Mancini's men held their nerve in a semi-final penalty shootout battle with Spain, while previously eliminating the world's no.1 ranked team Belgium in the quarter-finals. They conquered Austria in the extra time for their last-16 win after dominating Turkey, Switzerland, and Wales to top Group A.

Since the start of the tournament, Italy has netted 11 goals in the tournament with Ciro Immobile, Lorenzo Insigne, Manuel Locatelli, Matteo Pessina, Federico Chiesa, and Nicolo Barella being the scorers. But for England, eight out of their 10 goals have been scored by Harry Kane and Raheem Sterling which can become a problem for the home side in a tight final.

Italy and England have faced each other 27 times, the Azzurri winning 11 to Three Lions' eight, with eight draws. England suffered tournament-ending losses in both the teams' previous EURO encounters. Marco Tardelli's late goal earned them a 1-0 win in the 1980 group stage while Italy prevailed on penalties in the 2012 quarter-finals.

Notably, Italy has never lost to England at major finals, with the 2-1 FIFA World Cup victories in 1990 (third-place play-off) and 2014 (group stage) on top of those EURO triumphs.