Delhi Capitals has played all its three games at Wankhede Stadium and the side would now play its next two games here at the MA Chidambaram Stadium in Chennai. 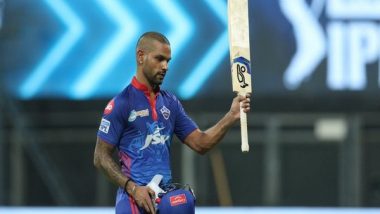 Chennai (Tamil Nadu) [India], April 20: Delhi Capitals' opening batsman Shikhar Dhawan reckons that the challenge for his side would be to switch on mentally on the Chennai wicket when they play defending champions Mumbai Indians. Delhi Capitals has played all its three games at Wankhede Stadium and the side would now play its next two games here at the MA Chidambaram Stadium in Chennai. The Rishabh Pant-led Delhi will take on Mumbai Indians later on Tuesday in the Indian Premier League (IPL). DC vs MI Preview: Likely Playing XIs, Key Battles, Head to Head and Other Things You Need To Know About VIVO IPL 2021 Match 13.

"MI has played 2-3 three over there before so they know the conditions, for us the challenge will be to switch on mentally according to the wicket and prepare our plan and just go and implement it and play with a positive mindset, aggression and look to win the game," said Dhawan in a video posted on the official Twitter handle of Delhi Capitals. On the other hand, all-rounder Marcus Stoinis reckons that the game against Mumbai would be challenging on a tricky Chennai wicket. IPL 2021 Points Table Updated.

"They are a very good team, we have played against them a lot of times recently and yeah, it is going to be a challenging game on that surface. They have got a really adaptable team and so do we so it will be a good contest," said Stoinis. Mumbai Indians has also played three games in the ongoing edition so far, managing to win two games.

Delhi and Mumbai are currently placed at third and fourth in the points table. Delhi Capitals had last defeated Punjab Kings while Mumbai Indians outclassed SunRisers Hyderabad in their previous game in the IPL. (ANI)