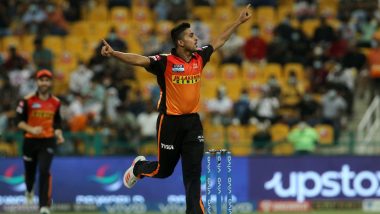 Mumbai (Maharashtra) [India], May 5 : Sunrisers Hyderabad pacer Umran Malik clocked 157 kmph on Thursday, bowling the fastest delivery of ongoing IPL 2022. Malik accomplished this feat during his side's match against Delhi Capitals at Brabourne Stadium in Mumbai. During the final over of DC's innings, he bowled a full-length delivery which was wide of off stump, which was hit by batter Rovman Powell for a four.  From Umran Malik to Rahul Tewatia, Shining Uncapped Players in IPL 2022 You Need To Know.

Though the result was not in favour of Malik, the ball was another feather in the cap for the pacer, who has been garnering acclaim for his fast bowling, accuracy and wicket-taking ability during the ongoing season of IPL from fans and cricketers from past and present alike. Overall, the match was not really great for the Jammu and Kashmir pacer, as he ended his four-over spell giving away 52 runs without any wicket. With an economy of 13.00, he was the most expensive bowler for SRH.  Mandeep Singh Equals Rohit Sharma’s Record of Most Ducks in IPL History.

Malik has been having a great IPL so far. In 10 games, he has taken 15 wickets at an average of 22.60 and an economy of 8.92. His best bowling figures are 5/25 against Gujarat Titans. Coming to the match, An unbeaten 122-run stand between David Warner (92*) and Rovman Powell (67*) powered Delhi Capitals to a massive 207 for 3 in 20 overs against Sunrisers Hyderabad at Brabourne Stadium in Mumbai on Thursday. It was not a day to remember for SRH's bowling attack, as it was smashed all over the park by DC batters.