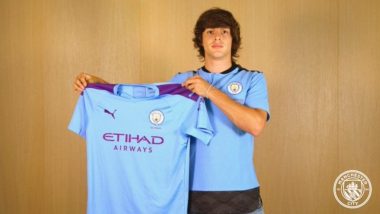 Manchester, July 1: Manchester City on Tuesday announced that Pablo Moreno has signed a four-year deal with the club. "The 18-year-old forward will join at the start of the summer transfer window on a four-year deal," the club said in a statement.

Moreno will join Manchester City from Juventus, where he has been a part of the under-23 squad for the last two seasons. Moreno's career began at Barcelona's La Masia academy, where he broke several goal-scoring records. His burgeoning reputation convinced Juventus to swoop for him in the summer of 2018 and he continued to develop in Italy. Juventus Transfer News: Miralem Pjanic Signs 4-Year Contract with Barcelona for 60 Million Euros.

We are delighted to announce Pablo Moreno will join the Club at the start of the summer transfer window, on a four-year deal.

This season, he scored four goals in three UEFA Youth League games. In March this year, he was named amongst the substitutes for a first-team Serie A game against Genoa.

The teenager has won three caps for Spain at under-18 level. Last year, he was part of the under-17 squad for the European Championships and World Cup.