Get latest articles and stories on Sports at LatestLY. The first time Lukaku joined Inter was in 2019. Last time, Lukaku played two seasons together, 95 games, 64 goals, and one league title. 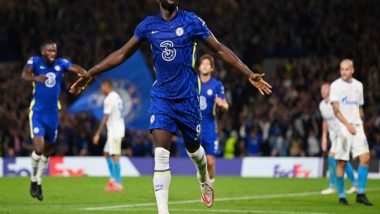 Milan [Italy], June 30 (ANI): Romelu Lukaku is back at Inter Milan after Seria A club signed Belgium International from Chelsea on loan.

The first time Lukaku joined Inter was in 2019 but he had long been a fan: as a kid, he used to admire the likes of Ronaldo and Adriano.

Also Read | Birendra Lakra, Olympian Hockey Star, Accused of Playing a Role in the Death of His Friend Anand Tappo.

Two seasons together, 95 games, 64 goals, and one league title. From his debut against Lecce, with a goal at San Siro, to the Scudetto trophy lifted after Inter Milan's final match of the 2020/21 season against Udinese, when he scored again. That's what Lukaku did for two years; score goals and lead by example during his time at Inter Milan.

He plundered 34 goals in all competitions in 2019/20, a season which saw the club finish second in the league and reach the Europa League final - with Lukaku taking the Europa League player of the season award.

In 2020/21 he notched 30 goals as he bossed Serie A. He was the chief instigator behind Nerazzurri's title charge, with 24 goals and 11 assists - the first player to reach double figures in both categories since 2003. Unsurprisingly he was named Serie A player of the season. After clinching the title, he took to the streets of Milan to celebrate with the fans.

Now, after a season at Chelsea - where he was the club's top scorer in 2021/22 and found the net in the semi-final and the final of the Club World Cup Club - Romelu is back at Inter. He's made the return journey from London to Milan - following in the footsteps of another great Nerazzurri striker, Hernan Crespo, who joined Chelsea in 2003 and returned in 2006.

After arriving in Milan and popping into Inter HQ to meet president Steven Zhang, the Belgium striker spoke to Inter TV before revealing his new shirt number for the coming campaign: No.90.

The San Siro club will pay the Blues an 8 million Euros (6.8m Euros/8.4m Dollars) loan fee, with the potential for performance-related add-ons, as per goal.com. Lukaku's move comes one year after he joined Chelsea for a club-record fee of 100m Pounds (136m Dollars) last summer.

Lukaku came back to Stamford Bridge last summer, 10 years after initially joining the club as a teenager, and resumed life in the Premier League by scoring in a win at Arsenal, before netting twice in his first home game as Chelsea defeated Aston Villa 3-0, scoring his first goals at Stamford Bridge.

He found the net again against Zenit St Petersburg but that would be the last time until the return match with the same opponents three months later, as he struggled to shake off the effects of an ankle injury suffered in another European tie against Malmo in October, which restricted his appearances in early winter.

Lukaku scored in back-to-back Premier League games against Aston Villa and Brighton between Christmas and New Year, before helping the Blues to lift the FIFA Club World Cup trophy for the first time at the beginning of February. He scored the only goal as Chelsea beat Al Hilal 1-0 in the semis before opening the scoring in the 2-1 final win over Palmeiras.

Combined with his first spell at Chelsea between 2011 and 2014, Lukaku has made a total of 59 appearances for the club, scoring 15 goals. (ANI)