Birendra Lakra, Olympian Hockey Star, Accused of Playing a Role in the Death of His Friend Anand Tappo

Olympian hockey player Birendra Lakra has landed in a controversy, accused of playing a role in the death of his friend Anand Tappo. 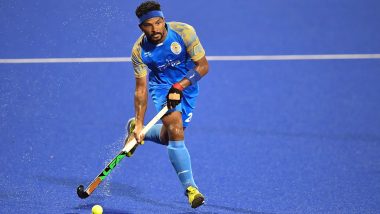 Bhubaneswar, June 28: Olympian hockey player Birendra Lakra has landed in a controversy, accused of playing a role in the death of his friend Anand Tappo. Anand Tappo's father Bandhana has levelled serious allegations against Lakra and a girl named Manjeet Tete, claiming that they are responsible for his son's death. All belong to Odisha's Sundargarh district. Notably, the body of Anand Tappo was found hanging in an apartment in Bhubaneswar under the jurisdiction of Infocity police station on February 28. Police suspect that Anand has committed suicide. However, the allegation made by the deceased's father has shocked hockey lovers in the state. Two India Men’s Hockey Team Players, Three Support Staff Members Test Positive for COVID-19.

"Only Lakra and Manjeet Tete were present in the flat at the time of my son's death. I doubt that Manjeet might be girlfriend of Anand and Lakra was also having some relationship with the girl. Due to such a relationship, there might be an argument between the trio that led to the murder of my son," alleged Bandhana. Bandhana Tappo further said that Anand had got married on February 16 this year and his reception was held on February 18 which was attended by Birendra Lakra. On February 28, Anand went to Bhubaneswar and this incident happened sometime after he arrived in the flat, he claimed. Hockey Men's World Cup to Be Held in Bhubaneswar in January 2023.

He further alleges that the family was not getting help from the police and Lakra being a DSP rank officer in Odisha Police was trying to influence the investigation. Bandhana demanded an impartial investigation into the case. Neither Lakra nor Manjeet have commented on the allegations, so far. On the other hand, a police official said an unnatural death case has been registered at Infocity police station and they were waiting for the viscera report for further investigation in this case. "If any wrongdoing will be found during the ongoing investigation or we will get any complaint from his family, we will treat the case as a cognizable offence," said the police official.

(The above story first appeared on LatestLY on Jun 30, 2022 03:27 PM IST. For more news and updates on politics, world, sports, entertainment and lifestyle, log on to our website latestly.com).