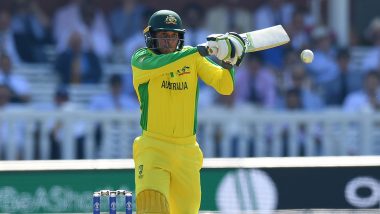 Melbourne, September 5: Left-handed batsman Usman Khawaja has said that he was a bit disappointed to not be a part of Australia's white-ball squad for the series against England. Australia is currently in the UK to lock horns with England in three T20Is and as many ODIs. Also Read | Dominic Thiem vs Marin Cilic, US Open 2020 Live Streaming Online: How to Watch Free Live Telecast of Men's Singles Third Round Tennis Match?

"There was a bigger squad for the UK white-ball tour so it was a little bit disappointing not to be in the team, but I mean I've been dropped and in and out of teams so many times that I've just learnt to deal with it, much better than I would've, say 10 years ago," cricket.com.au quoted Khawaja as saying.

"Fortunately I talked to Justin Langer about three or four weeks after that happened ... and got it all out in the open. It was a really good chat to have, and after that, I've been really good. I've focused again on just worrying about my cricket. So it just shows you the importance of communicating, and it was nice to have that," he added. Also Read | IPL 2020: CSK Captain MS Dhoni and Team Finally Start Practice in UAE (Watch Video).

Khawaja witnessed a stunning six-month period in 2019 as he registered 1,085 ODI runs at an average of 49.31, but since then, he has been absent from Australia's 50-over squad.

"You want to ask selectors if there's anything specific that's sticking out (regarding your non-selection) but in this case, that's not it. In this case, I'm a top-order batsman and you've got Steve Smith, Dave Warner and Captain Aaron Finch ahead of me," Khawaja said.

In the first T20I between Australia and England, the former witnessed a two-run loss to give the hosts a 1-0 lead in the three-match series. Australia was chasing 163 in the first T20I, and the side was placed comfortably at 124/1 with David Warner and Steve Smith holding fort. However, England staged a stunning comeback as the hosts took five wickets for just 24 runs. In the end, Australia suffered a two-run defeat.

With the win in the first T20I, England gained a 1-0 lead in the three-match T20I series. The next T20I will be played on Sunday at the Ageas Bowl in Southampton.