Rescuers in Indonesia were searching for 25 people who were missing after a ferry sank in the Makassar Strait in Central Sulawesi province, officials said Sunday. 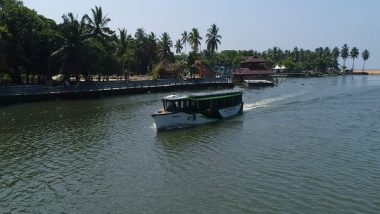 Jakarta, May 29: Rescuers in Indonesia were searching for 25 people who were missing after a ferry sank in the Makassar Strait in Central Sulawesi province, officials said Sunday.

A total of 42 people were on the boat when it sank in bad weather on Thursday morning while traveling from a seaport in Makassar to Kalmas Island in Pangkep Regency, said Djunaedi, the head of the South Sulawesi National Search and Rescue Agency. Like many Indonesians, Djunaedi goes by only one name. Assam: Boat Sinks After Colliding With Ferry in Brahmaputra, Several Passengers Feared Dead.

Seventeen people were later rescued, including some by two tugboats that were at sea at the time of the incident. Djunaedi said the search and rescue agency received new information about the location of the sunken ferry on Saturday and dispatched crews to the area.

Two ferries and a search and rescue boat, along with local fishing boats, are involved in the search for the missing passengers. Ferry tragedies are common in Indonesia, an archipelago of more than 17,000 islands, where ferries are often used as transport and safety regulations can lapse.

In 2018, an overcrowded ferry with about 200 people on board sank in a deep volcanic crater lake in North Sumatra province, killing 167 people. In one of the country's worst recorded disasters, an overcrowded passenger ship sank in February 1999 with 332 people aboard. There were only 20 survivors.