Get latest articles and stories on World at LatestLY. Baloch leader Maulana Hidayatur Rehman threatened to close Gwadar port on Sunday over the issue of freeing the coast of Balochistan from trawler mafia, particularly the Chinese trawlers. 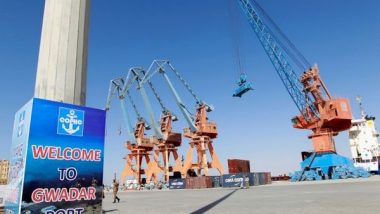 Rehman threatened to close the Gwadar port from July 21 if the demands are not fulfilled by the provincial government- free the coast of Balochistan from trawler mafia, open border points in Gwadar, eliminate drug trafficking and remove unnecessary check-posts, reported Dawn.

Hundreds of Chinese fishing trawlers have amassed at the Gwadar port in Pakistan's Balochistan, posing a threat to the livelihoods of thousands of fishermen in the province.

Speaking at a press conference recently, Rehman said that the port would be closed as a protest as the government is not fulfilling its promises made in the agreement signed in April this year for ending a month-long sit-in in the port city.

He is also provincial general secretary of the Jamaat-i-Islami and had led the Gwadar rights movement.

He criticised the opposition parties in Balochistan, saying that they have not raised their voice for the rights of the people of Balochistan. They did not raise objections even when the agreement for Reko Diq project was signed.

Rehman claimed that the law and order situation in Makran and Panjgur is deteriorating and in order to control it, the government must remove Frontier Corps from the province, reported Dawn.

At the Gwadar port, which belongs to close ally Pakistan, the Chinese catch fishes, which they then process and sell to international markets, thereby depriving local fishermen of their livelihoods.

According to Azadi News, at least 20 lakh people are connected to the fishing business in Gwadar. Their livelihoods depend on day-to-day fishing.

Due to interference by the Chinese ships, lakhs of fishermen are on the verge of unemployment and several families will be adversely affected by Chinese trawlers in the port.

Due to the situation, the fishermen would become increasingly dependent on the outside forces for their employment and their livelihoods will be destroyed.

Hundreds of people in Pakistan's Gwadar had earlier staged a demonstration against illegal fishing by Chinese trawlers.

Earlier in July, hundreds of fishermen, political workers and members of civil society staged a protest to cancel the fishing licences of Chinese trawlers to protect the livelihood of the Gwadar fishermen.

The National Party and Baloch Student Organisation had called for the protest rally and sit-in in front of the Gwadar Press Club against the Imran Khan government's move.

In 2015, China announced the China-Pakistan Economic Corridor (CPEC) project in Pakistan worth USD 46 billion, of which Balochistan is an integral part.

It would link Pakistan's southern Gwadar port in Balochistan on the Arabian Sea to China's western Xinjiang region. It also includes plans to create road, rail and oil pipeline links to improve connectivity between China and the Middle East.

The Balochs opposed China's increasing involvement in the province. The CPEC has not benefited the people of Balochistan while people of other provinces enjoy the fruits of the mega project.

This has led to widespread protests as the Chinese are viewed as encroachers who are squeezing out all the wealth from the region. (ANI)