He said that right now they do not have the votes in the Senate to change the filibuster. "That means we need two more votes now -- not now -- when we vote, probably after November -- more senators and House majority -- and the House majority elected in November to get this bill to my desk," he said. 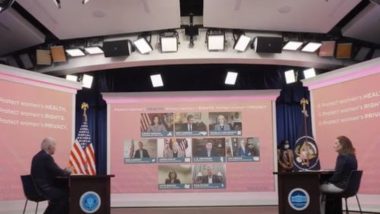 Washington, July 2: US President Joe Biden held a virtual meeting with Democratic Governors on reproductive rights of women in the country in the wake of a "tragic reversal" of Roe v. Wade and urged them to take action to protect access to abortion care.

In his remarks during the meeting with Governors, President Biden said, "I'm joined by a group of Democratic governors as we work closely to protect women's rights after this tragic reversal of Roe v. Wade -- a terrible, extreme decision, in my view, upending the lives and impacting on the health and safety of millions of women."

He said that he shares the public outrage at this "extremist Court" that's committed to moving America backwards with fewer rights, less autonomy, and politicians invading the most personal of decisions of not only women but we'll find, if they expend -- expand on this decision, men as well.

Recalling the actions he took last week, the President said, "I announced two specific actions. First, if extremist governors try to block a woman from traveling from her state that prohibits her from seeking the medical help she needs to a state that provides that care, the federal government will act to protect her bedrock right through the Attorneys General's Office." Bill Gates Shares His Five-Decade Old Resume on LinkedIn, Says ‘Your’s Better Than Mine’.

"Second, if states try to block a woman from getting medication the FDA has already approved and has been available for more than 20 years, my administration will act and protect that woman's right to that medication," he added. However, he stressed that ultimately, Congress is going to have to act to codify Roe into federal law and the filibuster should not stand in the way of being able to do that.

He said that right now they do not have the votes in the Senate to change the filibuster. "That means we need two more votes now -- not now -- when we vote, probably after November -- more senators and House majority -- and the House majority elected in November to get this bill to my desk," he said.

Biden noted that the choice is clear and stated, "We either elect federal Senators and Representatives who will codify Roe, or Republicans who will elect the House and Senate will try to ban abortions nationwide. Nationwide. This is going to go one way or the other after November."

He said that a lot of the people do not understand what this decision means. "It means if -- if you got a 11-year-old child who's a victim of incest and finds herself pregnant, which occurs, that, you know, she can't get choice, she -- she can't -- her health can't be protected. You find, you know, if you're raped, there's no exception," he continued saying. "There are so many things that people really have not focused on yet, beyond the fundamental right of a woman to be able to choose," he added.