A video has been shared in telegram groups and on Twitter saying that the people confronting the police are students of Shanghai but its authenticity cant be verified. He also says that Tian Huiyu was taken away for investigation because he gave anti-Xi remarks and belonged to the anti-Xi faction. 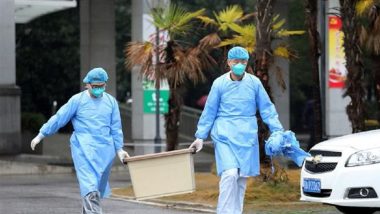 Bejing, April 25: A Chinese political commentator on YouTube has said that there is an internet blockade and heavy lockdown of the Fudan University campus, Shanghai. He said that recently when Fudan professor and CCP member Zhang Weiwei expressed his support for the authorities' extreme lockdown and zero-covid policy, even advocating the Chinese model against the European and American models he was beaten by a young professor at Fudan University.

Weibo also has many such speculative posts which are based on a Wechat screenshot. But there is no concrete proof, picture or video of the incident yet.

Although a few other political commentators have also talked about this happening, Fudan Uni Weibo account has refuted them as mere rumours. Non-mainstream HK media reported that students at Fudan University have been expressing their dissatisfaction, and the clues could be seen in the last week.

Shanghai Jiaotong University, Tongji University, Fudan University, and East China Normal University notified the quasi-closed management or closed management, requiring everyone to stay at home. It is also believed that Zhongnanhai is closely paying attention to the universities of Shanghai as well so as to not let students' dissatisfaction escalate. China Reports 2,666 New Local COVID-19 Cases, 51 Deaths.

A video has been shared in telegram groups and on Twitter saying that the people confronting the police are students of Shanghai but its authenticity cant be verified. He also says that Tian Huiyu was taken away for investigation because he gave anti-Xi remarks and belonged to the anti-Xi faction.

He points out that till now Xi has taken action against four key men of Wang Qishan. The first one was Jiang Chaoliang, who was demoted from the post of party secretary of Hubei to chairman of the Hubei People's Congress.

He also pointed out that when Xi Jinping's men were found to have been involved in corruption, only a few were brought to justice like Zhou Jiangyong, Secretary of the Hangzhou Municipal Party Committee.

Most of them are only demoted or benched like Ying Yong was made vice-chairman of the 13th National People's Congress Constitution and Law Committee after serving as a party secretary of a province (Hubei). Like Xu Liyi, Secretary of the Zhengzhou municipal Party Committee, and Wang Yongkang, the vice governor of Heilongjiang, which had clear cases of corruption but weren't investigated.

He also believes that "now Xi Jinping, Wang Huning and their gang" are governing the country according to their whims and fancies. He cites the example of Wang Xiaohui, recently made secretary of the Sichuan Party Committee who had no experience in local government at all.